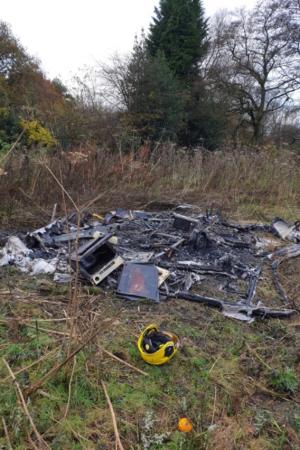 A caravan has been destroyed in a suspected arson attack at a Wilmslow farm.

Firefighters were called to a report of a caravan on fire at a farm in Newgate shortly after 8am on Monday, 11th November.

On arrival the crew discovered that the small caravan, measuring approximately two metres by one metre, had been completely destroyed by fire.

Firefighters used a hose reel jet to extinguish the fire and were in attendance for more than half an hour.

The fire is believed to have been started deliberately.

Anyone with information about the fire should call Cheshire Constabulary on 101, quoting IML 562271, or contact Crimestoppers anonymously on 0800 555 111.