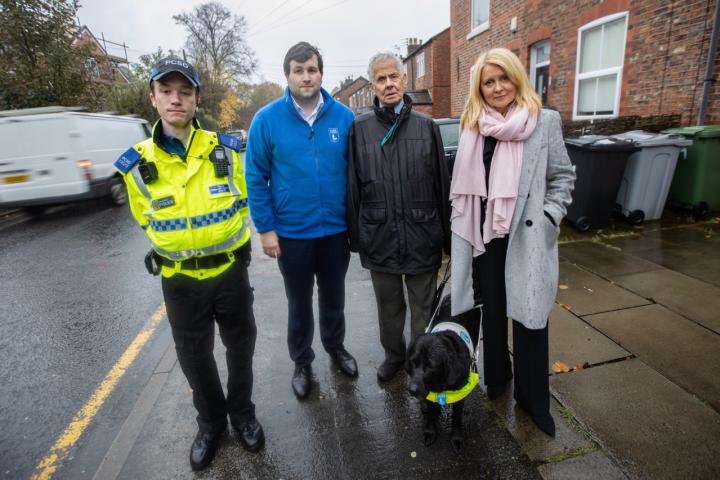 A local blind man met with the Tatton MP to demonstrate the daily difficulties he faces and the small changes that could be made to help make life less difficult for people with visual problems.

Bryan Rigg, who has been registered blind since 1985, contacted Esther McVey to tell her of the challenges he faces daily trying to get around.

Mr Rigg was then joined by Ms McVey, PCSO James Morris and Adam Marsh from the Guide Dog training centre in Atherton to follow his regular route from his home near The Carrs to Kenmore Medical Centre.

Mr Rigg said: "I often struggle with pavements, guide dogs are trained to take their owners to the kerb if they encounter an obstacle where they are told on command to take them into the road and then to 'find the pavement.' This can pose a risk as we only know if a car is coming based on noise and many electric cars do not make noise.

"Recently I went for a walk along the river Bollin and returned via Kings Road, Carrwood Road, Broad Walk and Hawthorn Lane. On this journey I encountered several refuse bins and had to leave the pavement nine times to avoid them – thus putting myself (and Ginny) in danger and upsetting some drivers who had to avoid us.

"I tend to avoid this area on Mondays, Hawthorn Lane and the Albert Road area on Fridays and the Lacey Green Road area on Thursdays as I know that I am at risk of being injured. There are overhanging tree branches and overgrown hedges too numerous to list that also cause a problem."

Ms McVey said: "People with visual impairments face so many challenges every day and have to manoeuvre around things that many of us take for granted. Seeing first hand the difficulties faced made me appreciate how we all need to be a bit more considerate and make small changes which will make a big difference to people like Bryan.

"Things like taking our bins back once they have been collected, cutting back tree branches and not parking partly on the pavement are simple ways we can help."

The day of the walk saw torrential rain fall but Mr Rigg explained he was unable to wear a hat as it could be knocked off by overhanging branches and he would be unable to find the hat once it was on the ground.

Mr Rigg said parking vehicles on pavements was also a big problem and told Ms McVey just last week how he injured his forehead on a wing mirror from a lorry parked on Styal Road, which was unloading scaffolding.

Ms McVey added: "I wanted to join Bryan on his walk to understand first hand the issues he was having. I also understand that, a lot of the time, sighted people have no reason to realise there is a problem and therefore don't know their actions are causing an issue. I am hopeful this will help raise the profile of the matter and I am delighted that James and Adam were able to join us.

"Separately, I will be talking to Cheshire East again to ask them to ensure empty bins are not left in the middle of pavements.''

Christine McClory
And cars are not parked on pavements, and hedges are cut back as are overhanging branches.
Thank you.

Hilary Pinnock
I fortunately enjoy full sight so can only imagine what a daily challenge Mr Rigg goes through....frightening I'm sure. I also care for Guide Dogs and have done so for some years so I do see, literally, how their training kicks in when confronted with obstacles on pavements.

It's been mentioned ad nauseum on all the local social media sites how the lack of common sense, forethought and consideration has such a negative impact on the local residents when dumping your car to come to work / go shopping / nip into the bank / whatever the reason....not just for physically or optically challenged folk, but also for the elderly with sticks and frames, mum's with pushchairs and for all of us actually.

I drive through Wilmslow most days and it never fails to shock me to see the bad parking, illegal parking, thoughtless parking etc, etc. Today, I saw countless cars parked in the cycle lane along Manchester Road (I thought this was an endorseable offence?). Wilmslow is fast becoming one big ugly carpark. I hate it.

So yes, Ms McVey, get a move on and do something to improve this constituency for all its inhabitants please....quick as you like. It's election time - just saying.

Clive Cooksey
Our pavements, Hawthorn Lane for example are an utter disgrace to the town and its councillors. Get out of your cars councillors and walk these boulevards yourselves, especially with my disability and walking stick. You will soon be moaning. All it needs is some fresh tarmac. Its not rocket science. Well done Bryan Rigg for bringing this to the attention of Esther.

Marcia McGrail
The community as a whole, not just the MP, should be stepping up for those less able but it's not a popular message in today's self-absorbed culture. It starts with the small considerate gestures - MOVE yer bin; DON'T park there; fold the pavement side wing mirror in (funny how folk are concerned about the roadside one getting damaged but totally unconcerned about the damage an overhanging wing mirror can do to a pedestrian) etc. Fresh tarmac may follow...we can but hope.