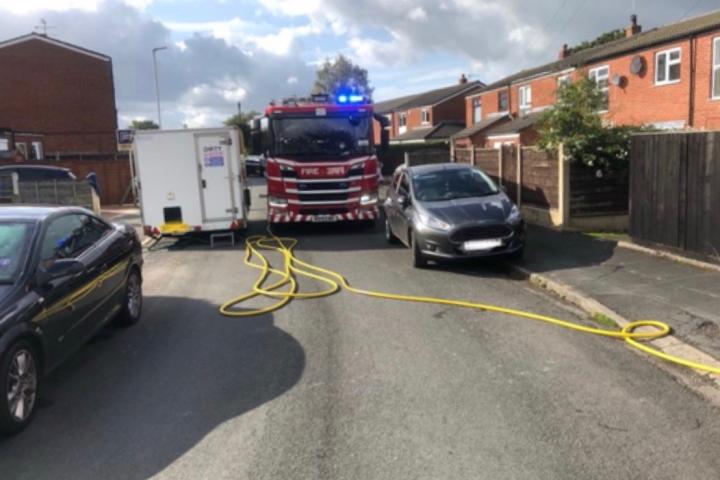 Firefighters are urging drivers to "Think Before You Park" after they were unable to reach a house fire this morning (Wednesday, 9th October) due to badly parked vehicles.

A spokesperson said "Charlie Watch we're unable to reach the scene of a house fire this morning due to badly parked vehicles. Firefighters had to dismount and run 70m with hoses to the property Luckily the fire was contained to a cooking pan."

At around 11.45am firefighters were called reports of a fire at a house in Clough Avenue, Wilmslow.

On arrival the crews discovered a small fire in the kitchen that had been caused by cooking food having been left unattended. No-one was unaccounted for.

Two firefighters wearing breathing apparatus entered the kitchen and removed the cooking from the house. They also extinguished the fire with a hose reel jet.

Once the fire was out firefighters used a large fan to clear smoke from the house.

Firefighters also gave an occupier medical attention before handing them over to the care of paramedics.

Firefighters were in attendance for nearly an hour.

Roy Simpson
I know the parking is wrong but surely a couple of firemen could have bounced the car out of the way !

Dave Cash
Just shows that inconsiderate partial footway parking does impede traffic flow for other
road users.. Based on photo, CEC should issue the offending driver a PCN for illegal parking.

Paul Tracey
To be fair, we don't know the full story here. The way the cars are staggered, makes me think the white trailer parked up last. If that wasn't there, there is no problem.

Dave Cash
Whatever the full story I think everyone would agree inconsiderate parking by all drivers.

Eric Butterworth
This inconsiderate parking is becoming a huge problem in Wilmslow’s residential areas , there was a fire recently at a property on Leaside way , which resulted in a fire appliance dealing with the fire and thereby blocking access to properties , and also to those trying to leave the area were prevented from doing so by the incident . Where developments such as Leaside way leading to a large number of properties in a dead end situation , and where those properties cannot be accessed by large vehicles such as Fire Appliances because of inconsiderate people double parking , which could result in loss of life if emergency vehicles cannot get through . Cheshire East Don’t seem to think it is a problem , but it is only a matter of time before a serious incident takes place .

Nick Gabriel
The tender should have just shunted the vehicle out of its way. Then presented the inconsiderate car and trailer owners with the bill for repairs to the tender. It is inconceivable that idiot drivers do not consider emergency vehicle access. Had it been their own property, and a child or elderly person had been killed as a result, maybe they would realise just how stupid and and pathetic they are !!!

And they wonder why they are subjected to road rage from people with a brain ?

Audrey Youngman
The double parking by schools takes some beating.

Robert Farr
I wonder when some yellow lines will appear in Wilmslow. It is nearly one year since all those consultations and civic visitors, but still no action. Why? Civic inertia? If there is a valid reason then tell us, it would make the frustration of the parking chaos a little more bareable. The other solutions are less desirable direct action by residents. Come on councillors let's have some action. Yellow paint and notices are not that expensive otherwise withholding of rates might stir bad publicity especially if promoted by respected persons.

Sandra Bills
According to the Parking Contraventions on the CEC website, Contravention Code 62, Parked with one wheel or more on or over the footpath or any part of a road other than a carriageway is fineable with an instant ticket at a cost of £70. The issue here seems to be lack of enforcement and that is solely the responsibility of CEC, unless a person takes a picture of the offending vehicle(s) and then uploads the image via the report illegal parking portal on their website where one assumes that they will then send out the appropriate fixed penalty notice.