Officers save life of Wilmslow pensioner following an abandoned 999 call 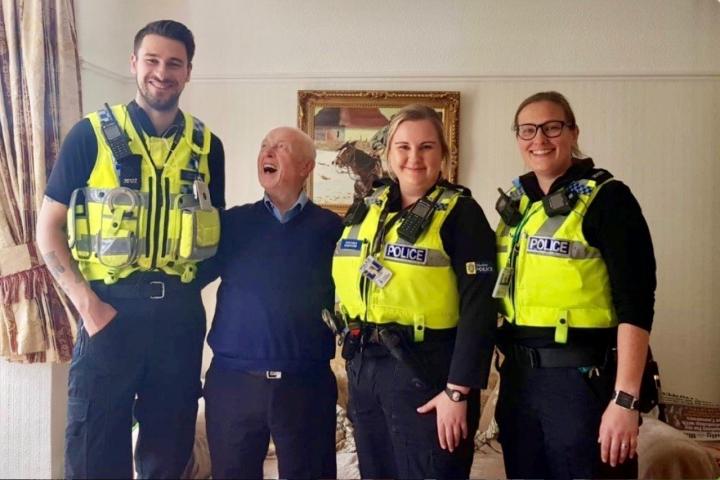 Officers have been thanked for following up an abandoned 999 call and performing emergency CPR on a Wilmslow man who was barely conscious.

Jan Krawczyk's wife called 999 on Sunday 25th August when he started feeling ill, but she dropped the phone as he collapsed to the floor.

PCs Steph Darbyshire, Jenny May and Ben Harrington attended the address in Wilmslow following the call, which was received at just after 7.30pm.

On arrival Jan, aged 79, was sitting on his sofa, drained of colour and suffering agonising pains in his head. He was vomiting and could barely stay conscious.

Suddenly, he fell silent and was struggling to breathe. At that point, the officers rolled him onto his back and commenced CPR. As the defibrillation pads were about to be placed on his chest, he made a quiet noise and gasped for a breath. He was then placed in the recovery position while waiting for the ambulance's arrival.

Jan was unconscious for a few days in hospital, until he was strong enough to have a pacemaker fitted. Once recovered and back at home with his family, he wanted to personally thank the officers for saving his life.

Macclesfield Police Station received an email from Jan's daughter asking to see if Steph, Jenny and Ben could come and visit him.

Following the visit Jan said: "I remember feeling dizzy and then I woke up two days later at the hospital not remembering what had happened. My family told me that the officers had to do CPR and had brought me back to life

"I have no idea how to thank them for this miracle."

When asked about the visit from the officers he added: "I was over the moon, as were my family as they had witnessed what had happened and were worried for weeks. Seeing the officers made them feel really grateful, and the officers were happy to see me too. I think they were proud of what they had done.

"Now every time I see the uniform I feel really happy."

PC Ben Harrington said: "At first it was weird seeing Jan in such good health, since only a few weeks back he was fighting for his life.

"It was uplifting to witness the aftermath as it's rare that officers can see that side of things.

"This experience made us realise the impact that we had on Jan's life and that what we did was actually a really big thing."

Macclesfield Chief Inspector Jez Taylor added: "The fantastic work of the three officers involved in this incident has undoubtedly helped save Jan's life.

"They should all be extremely proud of their actions, and it's fantastic to see that the man is now at home making a good recovery.

"Steph, Jenny and Ben will be considered for a local reward and recognition award for their outstanding work."