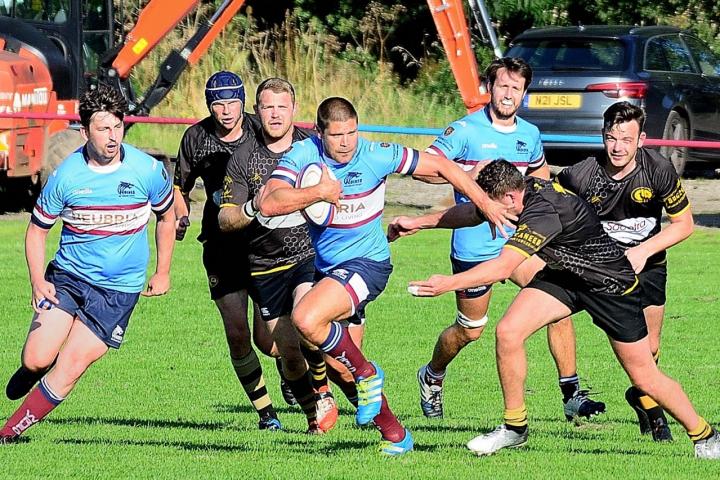 The score line would suggest a comfortable third league win for the Wolves, five tries against two, and in some respects it was. That though was only part of the story. Northwich fought tooth and nail throughout to make a contest of it. They had most of the possession for most of the afternoon, most of the territory but what they didn't have was the pace and creativity to break down a resilient and committed Wilmslow defence. In fact, Robert Taylor's side never missed a tackle.

At this level, the Wolves were able to cope but whether they would have been able to at the next level up is another question. Nor did Northwich manage even a single clean cut line break. Eventually they would lose the ball. It didn't matter in which part of the field for once again the Wolves were at their most dangerous when the ball went loose. Their back line is stuffed full of players, who only require a glimpse or mere sniff of a chance to break away and score.

Northwich kicked off on a glorious late summer afternoon, the Wolves fielded the ball cleanly enough but couldn't make much progress in the face of the Northwich defence. A clearing box kick was taken by the visitors and they retained possession for several phases until losing the ball on their throw on the Wilmslow line.

For the next ten minutes or so, the Wolves were kept penned back in their own half until right winger James Coulthurst made a determined drive into Northwich territory to set up a scoring opportunity on the left wing. The final pass went forward but from the scrum and subsequent lineout, the Wolves forced a penalty lineout from which prop Adam Taher burrowed over to open the scoring. Coulthurst is no flyer on the wing but he has a footballing brain and in this game he made several powerful runs to get the Wolves on the front foot.

From the restart, the Wolves were again penned back into their own half of the field until scrum half Sean Street ran from a scrum in his own half into open space to release his outside backs who put Mark Jennings away for the second try. The game continued in much the same vein, Wilmslow stuck in their own half, Northwich not making much of it, until on the stroke of half time, Northwich spilled the ball deep in the Wilmslow twenty two, the Wolves grabbed it to run out of defence, put in a long kick ahead and there was Street after it far ahead of the chasing posse to touch it down for try number three. Northwich players could hardly have believed that after spending nearly 70% of the game in the Wilmslow half, they were 21-0 down at the break.

They opened the second period in much the same style until conceding a penalty at the breakdown, which MacCallum planted into the corner for his forwards to execute another catch and drive for Taher to score his second of the afternoon. The Wolves then dropped the restart which enabled Northwich with the benefit of a string of penalty awards to set up camp in the Wolves twenty two. A try looked inevitable but it took a while coming, until space opened up on the left for No.8 Jack Baillie.

From the restart, they worked their way back into the Wolves twenty two. Ten minutes later, they scored again from close range. Number 7 Shaun Burmah actually got the touchdown but referee Irvine ruled that he had been high tackled by Wolves prop Mike Parker. A penalty try was awarded and Parker got a Yellow Card for his trouble.

There was still time for Northwich to make things very awkward if they continued to dominate. The Wolves forwards then knocked on with the line at their mercy. Ever aware, MacCallum was sufficiently alarmed by the way the game was going, his side was down to thirteen on the pitch, to attempt a shot at goal from the very edge of his range, which drifted narrowly wide. No matter though, the Wolves soon had an attacking scrum from which the ball quickly went into midfield for Jennings to burst through for try number five and that was that.

True, there had been half a dozen changes, mostly enforced, from the side that had played Stockport the week before but nobody could have felt totally satisfied with the Wolves performance. At times they were very dangerous with ball in hand and their defence was solid but their ball retention gave the visitors too many chances. For their part, the Northwich players will be wondering how, after dominating so much of the game, they still ended up twenty one points adrift.

Wilmslow now lie second in the table on points difference behind Penrith, whom they visit next week.