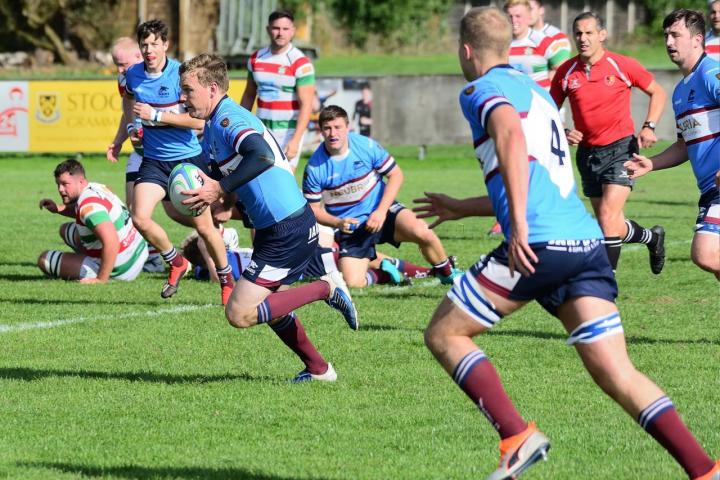 This was another nail biter of a game between these two well matched old rivals, which went right to the wire. As you would expect, it was a tousy sort of a match with no shortage of incident, whether fair, foul or feisty. In a frantic finish, Stockport laid siege to the Wilmslow line as they tried everything they knew to salvage a match saving score. Both sides made errors in these tense last few minutes but the Wolves just managed to hold on to take another five league points.

On an agreeable late summer afternoon, Stockport were first out of the blocks. They forced the Wilmslow receivers into an error right from the kick off and from the ensuing scrum, a gap quickly opened up in Wilmslow's defensive line through which Stockport scrum half Rory Austin sped away without any hand being laid on him for the opening score in less than a minute. For the next fifteen minutes or so, Stockport's rugby was nearly fault free as they retained possession with accurate passing and support of the ball carriers. Wilmslow had at least two narrow escapes during this period but they couldn't do anything about left winger Dudley Southern's try on the ten minute mark to put Stockport 12-0 to the good.

Of course, it couldn't last and the Wolves eventually got their hands on the ball from a turnover. Stockport started to play like mere mortals and the Wolves began to create their own opportunities. From a penalty lineout, centre Mark Jennings was ruled to be held up over the line but soon after from a scrum ten metres or so out in front of the Stockport posts, crisp passing on the narrow side released scrum half Sean Street for the Wolves first try. It was nip and tuck for a while after that but Wilmslow seemed now to be creating the better chances. 'The only reason, we're not winning this game, bawled Bob MacCallum to his team mates, is that we're making too many careless mistakes and not taking our chances.' It wasn't until the last play of the half, when No. 8 Alex Taylor caught the Stockport defence in two minds as he broke from a scrum twenty metres out to run in the score, which put the Wolves 14-12 ahead at the break. Two more scores followed in the third quarter. First Adam Taher broke from a catch and drive to touch down in the corner and then moments later from the restart, MacCallum, playing at full back, found space to split the Stockport defence and to time his pass to Jonny Kennedy for the centre to run in from halfway.

Stockport looked down and out as the Wolves advanced again from the restart but this time they forced a turnover in the tackle and from a penalty lineout a few moments later, their forwards drove to put substitute Jordan Pearson in for their third try. They kept possession for the next few phases and then with sufficient time still on the clock, they opted for three points from a penalty to make it a four point game. Unfortunately for them, they then got penalised at the breakdown and MacCallum planted his kick close to the Stockport line. The Wolves forwards couldn't get their catch and drive going and the ball was released into midfield where the Stockport defenders strayed offside. MacCallum took the points on offer to restore a seven point lead. The Wolves should really have cleared their lines from the restart but they allowed the Stockport forwards to steal the ball and for the remaining minutes it was it all hands to the pumps to keep the Wilmslow ship from going down. In their eagerness, Stockport were penalised several times for offside and breakdown offences, which eventually enabled MacCallum to put the ball out of play for no side.

Coach Chris Jones would have had plenty to have been pleased about, not least a hard fought win. The return of Jonny Kennedy to partner Mark Jennings in the centre added an extra dimension to the Wolves midfield play, even though the dangerous duo were in the main well marshalled by their Stockport opposites. Ethan Harding moved into the No. 10 spot and hardly put a foot wrong, whilst MacCallum at full back seemed to revel in the extra time and space he enjoyed there. Up front, the forwards generally held their own even though, the Stockport pack seemed to just have the edge in the scrum, without ever gaining much advantage from this. The Wolves lineout was an improvement on the previous fortnight but still not quite functioning as well as it could be, especially in catch and drive situations. Do the coaches need to work on the forwards' body positions? There were still too many relatively unforced handling errors in close play, probably caused by impatience as much as anything else, and the restart needs to be worked on but the biggest improvement was at the breakdown where there was a big reduction in the penalty count against the Wolves. Clearly, this wasn't by chance as you could hear MacCallum from full back regularly barking out instructions to his forwards to keep their hands off the ball. The best back row forwards have an uncanny knack of knowing when to go for the turnover, normally when a ball carrier becomes isolated, and when to let the opposition have it. The impact though of MacCallum's on field coaching from full back should not be under estimated.

Next week, the Wolves prepare to host Northwich, who won 24-20 at home against Burnage. Matches against Northwich are always close run affairs and we can expect more of the same next Saturday.