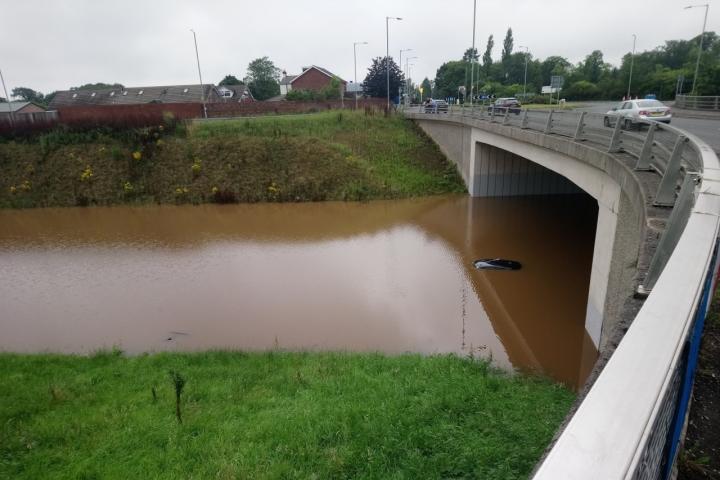 Recovery works following last month's flash floods are continuing across the north of Cheshire East – as further drop-in sessions are to be held for the communities affected.

Heavy and prolonged rainfall at the end of last month caused severe flooding in areas including Poynton, Bollington, Kettleshulme, Handforth, Wilmslow, Adlington and Rainow, with 150mm of rain falling over five days. Between 60-90mm of this fell in just 24 hours.

To provide information and advice to those affected by the localised flooding and support them to become more flood resilient in the future, a multi-agency drop-in event was held in Poynton earlier this month and further sessions have now been organised.

Two further events will take place this month including one at Wilmslow Library between 3pm and 7pm on Thursday 12th September, for those in the Handforth and Wilmslow areas.

The event is being hosted by the Environment Agency and will be attended by officers from Cheshire East Council and other partner agencies including United Utilities.

A spokesperson for Cheshire East Council said: "The council is committed to keeping our communities safe and supporting people to protect themselves, their properties and businesses, as much as they possibly can, from flooding.

"We encourage anyone with concerns or questions about the recent floods to attend these drop-in events. The feedback we receive will help us to shape a longer-term strategy for the area."

Cheshire East Council has initiated a multi-agency investigation into the flooding incidents. A Section 19 report will be produced which is anticipated to be completed in around 12 months' time, with its findings and recommendations made public following an internal and external approval process.

During the severe weather period between 27th July and 2nd August, the council's highways team received almost 1,140 requests of service across Cheshire East – 380 of those required an emergency response.

Working on a priority basis, additional resources are assisting with the repairs and clear up operation. All gullies in the north of the borough are being emptied, assessed and any further work required will be programmed.

A number of larger repair and reconstruction schemes have also been identified and due to the complexity of the work, will take some time to complete.

More information about the highways flood recovery works and the road closures still in place can be found on the Cheshire East Council website. www.cheshireeast.gov.uk/highways_and_roads/roadworks/flood-recovery-damaged-roads.aspx

The flooding also had a large impact on Cheshire East's Public Rights of Way network and dozens of reports of damage were received. Issues included sink holes; fallen trees, surface damage and bridges which had been destroyed, swept down stream or undercut by rivers.

The council's Public Rights of Way team has been arranging for repairs and the replacement of structures where needed and informing landowners of any trees that need to be removed. This will take some time given the scale and complexity of the work.

Damage was also caused to some of Cheshire East Council's country parks and trails. In some areas, footpaths, fencing and riverbanks were washed away, while many areas were covered with debris.

Julian Barlow
A “multi agency event”- what a load of cobblers! “Multi agency” just means that CEC can dodge responsibility for their ineptitude.

If Macdonalds serve you a substandard burger, they don’t suggest you meet with the beef farmer and the person who baked the bun.

We pay CEC A fortune to maintain and manage our county, our contract is with them.

Alan Brough
Is the pun in the "headline" intentional?