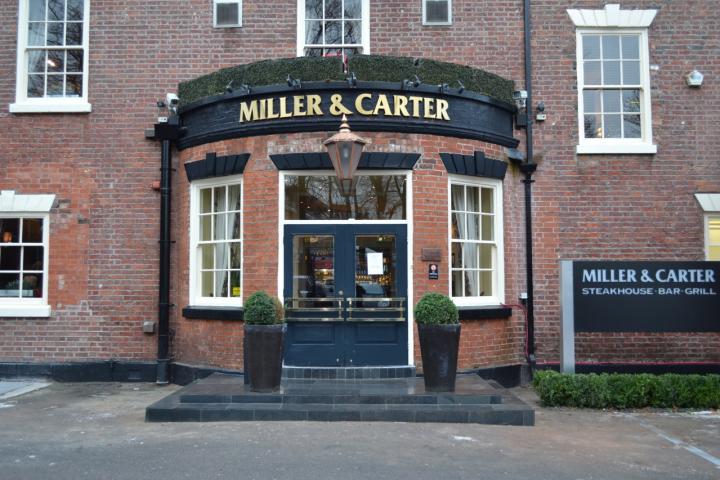 Some drivers have been surprised and annoyed to receive parking fines for using a restaurant car park even though they say they only entered it to turn around and did not park there.

EuroCarParks have been employed by Miller & Carter to monitor their car park on Station Road to reduce the number of people using it when not visiting the restaurant.

However, the new system has meant that those using the facility to turn around are also issued with £85 fines, which are reduced to £50 if paid within 14 days.

Esther Morrison of New Mills, recently received a fine. She told wilmslow.co.uk "Miller and Carter Wilmslow assure me that they arranged for it to be cancelled, the day after I received the fine notice, which I hope is right. I was surprised that they managed it so fast, given EuroCarParks's reputation.

"I definitely entered at that time but backed straight out on seeing the parking notice.

She added "Kwik Fit (where I parked) told me that the mum of one of their staff members got fined for turning round to pick up her son.

"Unfortunately I haven't yet received that cancellation in writing!"

A spokesperson for Miller & Carter Wilmslow said "We introduced a parking monitoring system at the restaurant due to the overuse of the car park by non-guests, meaning at times people intending to visit us couldn't as the car park was already full.

"The new system asks guests to enter their car registration into a number of tablets located inside the restaurant, giving them free use of the car park when dining.

"The system does allow a short grace period for those briefly entering and leaving the car park.

"If you feel you have incorrectly received a fine we ask that you get in contact with the team at the restaurant who will be happy to help."

David Smith
Dear Mr Miller and Mrs Carter - such treatment of 'visitors' to your premises make me want NEVER to enter one of your 'eateries', ever.

Sally Hoare
Anthology and Coach and Four already have this system. It is the usual story of needs must because selfish people have taken advantage.

Fiona Doorbar
Similar or same is in use at the merlin.... you get 15 minutes grace if u have to use as a turn in or pick up point and are a non customer....why is this not set up the same way?

I will not be going there again.

Bob Bracegirdle
One day they’ll find a way to tax the air we breathe.

Howard Sheard
Don't acknowledge the fine in any way . It's not enforceable.

Jonathan Follows
Ignoring is bad, outdated advice. These aren't "fines" and they are enforceable under contract law through the small claims court.

In practice, Euro Car Parks rely on bluster and threatening letters and don't tend to go down the route of court. However they have six years in which to do this. Do you feel lucky?

Better approach is to contact the restaurant as reported. And stop being a customer of theirs if you are already.

Worst case is that you can defend a case brought against you but it's a lot of hassle and Euro Car Parks knows this, and knows that a lot of people "pay up" even though they feel they have done nothing wrong. It's a murky business, however it's legal.