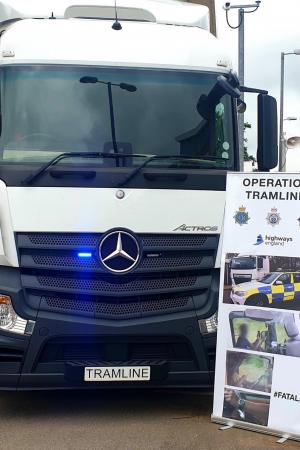 From the 7th to 17th July officers from the North West Regional Commercial Vehicle Unit dealt with 72 drivers for various offences including driving while using a mobile phone, not wearing a seat belt and parking on the hard shoulder.

In total 87 offences from 69 lorry drivers were detected during the operation as officers patrolled the M62 and the M6 motorways.

These offences included 10 drivers found to be using a mobile phone, 23 drivers found not to be in proper control of the vehicle, 36 driving without wearing a seatbelt, two who were found parking on the hard shoulder and 16 various other offences.

PC Chris Buckley, of the North West Commercial Vehicle Unit, said: "While this was a successful operation it is disappointing that some lorry drivers are still committing driving offences.

"Lorry drivers should know that the law is in place to ensure the safety of not only themselves but other road users too.

"I hope drivers will see this operation as a warning and that officers up and down the country may be patrolling in an unmarked HGV and monitoring your driver behaviour."

Graham Steel
Sounds very positive. Could we see something similar on the town roads as well as on the motorways - a significant proportion of motorists will drive at above the speed limit when traffic is flowing freely. High vis campaigns and electronic speed check signs are useless. A proper campaign with unmarked surveillance would deliver safer, fairer roads for all.

I am writing the day after the thunderstorm. This morning I was cycling to work and came across a flood stretching across the width of the road. As I wheeled the bike to negotiate my way around the side of the road there was a sudden hoot and a taxi went at (I reckon) around 40 miles an hour straight through the flood. At least he hooted to let me know that he was there, but I was absolutely soaked, along with another pedestrian. This was on a road with a 30 mph speed limit: that driving was reckless.