Alan Turing will be the face on the £50 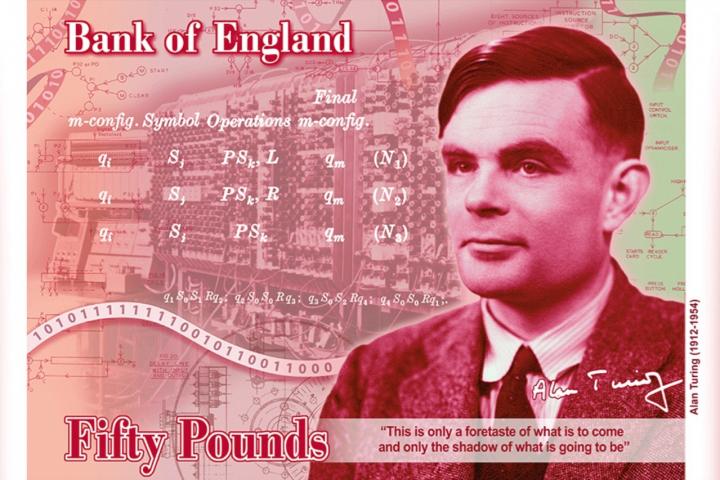 The scientist Alan Turing will feature on our next £50 note which is expected to enter circulation by the end of 2021.

The Bank of England has announced that the new £50 note, the first £50 printed on polymer, will celebrate Alan Turing and his pioneering work with computers.

The World War II code breaker who lived in Wilmslow, was a key figure in cracking Germany's Enigma code that helped the Allies win World War II and was later criminally prosecuted for his homosexuality. As a result of the conviction Turing lost his security clearance and had to stop his work. He killed himself two years later in 1954.

In December 2013, Turing was granted a pardon by the Queen under the Royal Prerogative of Mercy, following a request from justice secretary, Chris Grayling.

The new £50 note will feature A photo of Turing taken in 1951 by Elliott & Fry which is part of the Photographs Collection at the National Portrait Gallery along with a table and mathematical formulae from Turing's seminal 1936 paper "On Computable Numbers, with an application to the Entscheidungsproblem". The paper is widely recognised as being foundational for computer science and introduced the concept of a Turing machine as a thought experiment of how computers could operate.

The note will also feature technical drawings for the British Bombe, the machine specified by Turing and one of the primary tools used to break Enigma-enciphered messages during WWII, a quote from Alan Turing, given in an interview to The Times newspaper on 11 June 1949: "This is only a foretaste of what is to come, and only the shadow of what is going to be", Turing's signature from the visitor's book at Bletchley Park in 1947, where he worked during WWII and ticker tape depicting Alan Turing's birth date (23 June 1912) in binary code.

Laurie Atterbury
A bit late now , he was treated very badly by our state system. One can only hope that he has forgiven our society and accepts the pardon he was given and is proud that his work is now properly recognised.

Lee Massey
Dear Laurie ,
If it's any consolation to you , I read your Post to mean that you hoped Alan Turing was " Looking Down at us from above " , in a spiritual sense , and not that he was still alive today .

Laurie Atterbury
Hi Lee yes that is what I meant thanks