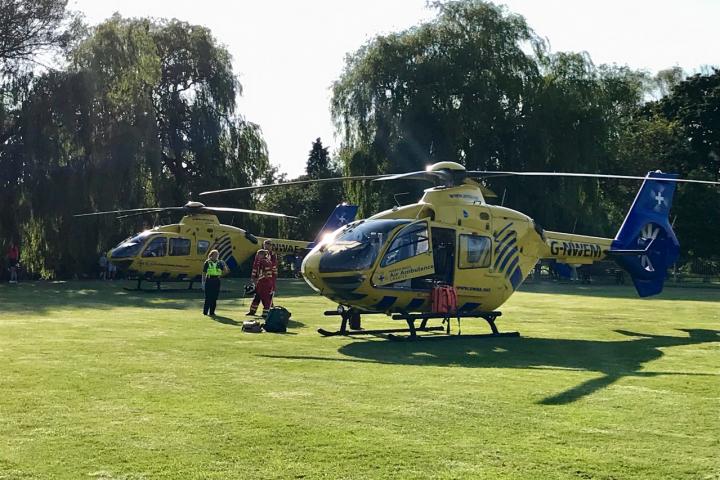 Emergency services responded in force when they were called to reports of a fight on Wilmslow Road in Handforth at 6.10pm on Wednesday, 3rd June.

Several police cars and ambulances were sent to the scene. Additionally, North West Air Ambulance attended with two helicopters which landed on Meriton park behind The Paddock.

"The two suspects were taken to hospital with injuries.

"An air ambulance which was called to the scene was not required."

Alan Brough
"Several Police cars and ambulances were sent to the scene. Additionally NW Air Ambulance attended with two helicopters"......... to a section 18 assault (formerly known as GBH) in a park in Handforth where two arrests were made and a man received minor injuries?

Either there's more to this story than meets the eye or their needs to be an urgent review of communication and deployment of Emergency Services.

Pete Taylor
As Mr Brough says... unless there was more to it....
When I was a lad in, in Didsbury, this “incident” would have been dealt with by two Constable, on bicycles, carrying truncheons.

Diane Walker
If this report of the amount of Police, ambulance and Air Ambulance attendees is true, then it's an absolute disgrace! Totally agree with the two comments above!

John Harries
True, some facts would help to make informed opinion but...
on the face of what is reported, an utter waste of resources.....two helicopters!!!
Might have been difficult to prevent a fight occuring but sounds more like a pub related incident "...lets go to the park and see who's right" sort of stuff.
What is of more concern is where and when. It happened mid-week/late afternoon at a well used recreation park - soft area and swings etc. and fenced all-weather area mainly for children - not 100M from the main shopping centre. The way our police presence is set-up is a disgrace, thought up by bean counters rather than an organisation for law and order in civil society. The idea of having local bobbies on patrol may not have prevented it starting this incident but they should have been around to break it up and it's about time the current 'flying squad' light bulb moment is canned and the police get back to real crime prevention.
I stand to be corrected on numbers but who in their right mind (and a six figure salary....) considers 3 police 'persons' is sufficient day-to-day cover for the Handforth/Wilmslow/Alderley Edge district operating out of/controlled from a Macclesfield based centre....and that's just the police, what about the other emergency services.

Deleted Account False Name
From what I heard there were concerns it was a knife fight so that might have invoked a more urgent response but who knows?!

Sarah Wilkinson
Donations from my father's funeral went to support the North West Air Ambulance. They were considerable but they probably wouldn't have covered the cost of the two helicopters that turned out to an incident where someone received "minor injuries". I'm reconsidering where my donations will go in the future.

Audrey Youngman
The report was that somebody had been stabbed. In actual fact one chap was hit in the head with a bottle. Don't know if it was broken. What information was passed to the emergency services I know not.

Laurie Atterbury
Two helicopters were needed because there were two blokes fighting and they both couldn’t have been dealt with at the same time at a& e.Surely that’’s obvious; can’t see why people on here can’t figure that out for themselves?

John Harries
Laurie Atterbury, what exactly do you think the air ambulance service is intended for?
We don't know the extent of injuries sustained, in fact we don't have much detail at all but the headline states
"The two suspects were taken to hospital with injuries.
An air ambulance which was called to the scene was not required."

I know for a fact that an ambulance and a mobile paramedic vehicle attended, there could have been more conventional medical units that didn't drive past my house en route to the scene. In our location we are fortunate to be centric to two major A&E hospitals that are no more than 12-15 'emergency' minutes away by road.
Three different individuals are mentioned, two 'suspects' were taken to hospital - so I guess that is the two people actually fighting and a third person (a bystander or party not directly involved?) sustained minor injuries.
One of the two air ambulances was not required?
No mention of serious or life threatening injuries to anyone!
Bystander(?) treated at the scene.

This was not a major incident. It's possible a considerable injury occured to one or both protagonists but the requirement of any air ambulance support (in extremis a vital service substantially funded by public donations) is at the very least a dubious call and I completely sympathise with the comments by Sarah Wilkinson. Command/control/management of the emergency services is vital and complex but at risk of serious mis-use, particularly in this age of mobile communication being instantly to hand of almost anyone, anytime.
Well meaning or by malicious intent, calls have to be judged, handled and acted upon with great care and due consideration - I rest my argument with the comment that next time it might be you/me, innocently involved in a motorway pile up or train derailment when the air ambulance lift to specialist care isn't available to me or others in critical condition because of a punch up in a park!!