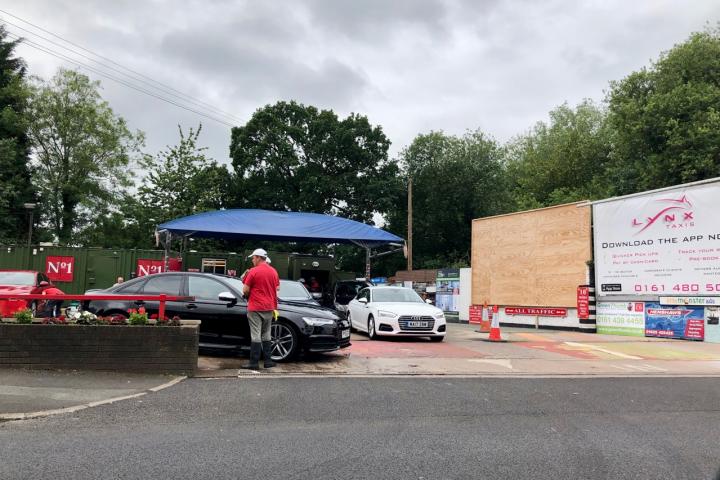 A hand car wash has been refused planning permission to retain two hoarding boards which it has erected off Wilmslow Road in Handforth for advertisements unrelated to the business.

No.1 Valeting Ltd, which installed the two, 48 sheet advertisement signs without planning permission in February, will now need to remove them as they are considered to give the Green Belt site a cluttered and untidy appearance which detracts from the character and appearance of the streetscene and are detrimental to the openness and visual amenities of the wider area.

The Planning Officer stated "There is already extensive signage on the site. This includes two pole mounted signs along the frontage advertising the hand car wash on the site. There is also an existing hoarding, which does not form part of this application. This hoarding is being used for advertising unrelated to the car wash. This application seeks to retain two further hoardings, which are already in situ. Similar to this original hoarding, the two new hoardings would not be used to advertise the existing business.

"It is not unreasonable for a business to have adverts relating to the business. However, the installation of a further two large hoardings, unrelated to the business would give the site a cluttered and untidy appearance, detracting from the openness and visual amenities of the wider area. The proposed signs are prominent features in the streetscene, as a result of their position and size.

"The cumulative impact of the signage detracts from the appearance of the site and the surrounding area."

Julian Barlow
Thank heavens the Council is taking a robust approach to the protection of our greenbelt otherwise they might be accused of being inconsistent, duplicitous, backhandy types and before long, the County would be blighted with vast, sprawling housing developments, relentless roadworks and chronic parking issues.

It's easy to see how a couple of signs erected on an existing commercial site would be catastrophic for the greenbelt, not to mention the additional strain they would add to our already struggling schools and Doctors surgeries.

Chris Wigley
Hoardings on the very border between Handforth and Heald Green situated on the old A34 give the Green Belt a cluttered appearance. Whilst not very far away 14 acres of agricultural land that was used for hay and over wintering sheep is soon to become 210 houses. I know which I think is clutter.

Roger Bagguley
Excellent point made Julian Barlow. This new regime does need to be consistent in refusing any unnecessary developments in the Green Belt be they houses, offices or advertising paraphernalia. Enforcement must enforce. Those who seek to convert the Green Belt into cash need to get a clear message: Cheshire East Planning is not an easy street any more. Officers need protection as Julian suggests.

Alan Brough
Evidence (if it were needed) that CEC hasn't got a clue what Green Belt is, what it looks like or what benefit it has if it cant be converted to cash.

Deleted Account False Name
Thank you for all these comments - they made my day!!!

Deleted Account
We thought this was a spoof article but sadly it's not.

YES : Greenbelt housing estates to bring in council money but without the appropriate infrastructure !

NO : Car wash advertising on greenbelt ...