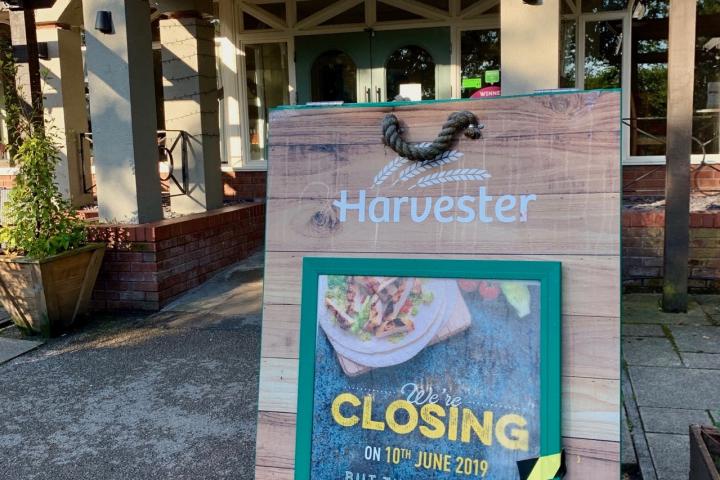 The owners of a family-friendly restaurant in Wilmslow have confirmed that it will be closing today (Monday, 10th June).

The Boddington Arms on Altrincham Road, which was rebranded to Harvester in February 2016, will undergo a refurbishment and reopen as an American restaurant.

The pub was originally part of the Orchid estate which was acquired by Mitchells & Butler's in 2014, along with 172 other pubs across the UK.

A spokesperson for Mitchells & Butlers: "We constantly review our estate and look for new opportunities for our locations. The Boddington Arms will close and the site will be leased to Hickory's Smokehouse. The team have been consulted and we hope to redeploy as many employees as possible at other businesses we operate nearby."

Hickory's Smokehouse applied to extend the Unicorn Inn on Adlington Road and convert its use from A4 (drinking establishment) to A3 (restaurant) in December 2014. However, the company withdrew their planning application three months later after a group of local residents, who set up a 'Save the Unicorn' campaign, collected over 1000 signatures on their petition and Wilmslow Town Council's planning committee recommended rejection of the application.

Plans have been submitted for a number of external changes to The Boddington Arms including new repositioned front entrance, new canopy, new veranda and external cladding.

Sally Hoare
I commented on here at the time that this would be more suited to this site than the Unicorn. Hope it works.

We've eaten there a couple of times as The Boddingtons and although it was a little quiet, the service was faultless.

So let's hope they keep the good staff on ?

Nick Jones
I concur with Sally... Best of luck to Hickory's !..A welcomed improvement !!

Helen Hayes
Good luck to them.

Living opposite, I can only wonder at the fact they’ve managed to pass the Boddington family covenant in place to all houses (Quakers) about change of use and also pass the smoke free zoning law.

It’s a smoke free zone for many reasons, not least; it’s all built on peat.

What could possibly go wrong?

Barry Buxton
Good riddance to it as a Harvester. The food and service were atrocious.

David Smith
I've been a couple of times to watch the footy and have to say the atmosphere is nothing to shout about. The selection of beer on tap is pathetic. There is hardly a bitter on draught and what they do have is REFRIGERATED! We British like our ALE - room temperature. Even the bottle beers are refrigerated so if you are not happy with the cold draught beer there isn't even a simple alternative. If it's turning into an American restaurant I can't ever see me going again as I've been to the USA enough times to know that beer over there is always freezing and NEVER the real ale variety. Plus food is always fast and mostly burgers, steak or chicken with FRIES that are just not CHIPS.

Clive Cooksey
Bring it on & about time too. Having used American smoked meat style diners my mouth waters at the thought. It had better be good though. If not, it will die a death like all the previous ill starred efforts before it. Fingers crossed.

Randal MacRandal
I live in Morley [Green] and welcome the arrival of Hickory Smokehouse. The Boddington Arms is an iconic Manchester name and with a hint of deference to David Smith's view of British real ale, like Boddingtons used to be, I agree with Clive Cooksey's sentiment.
The Boddingtom Arms struggled to find an identity but I will miss the legal TV footie streaming on my doorstep. Can't see new proprietors continuing this.

Dave Cash
Neither can I see the new Hickory Smokehouse honoring my remaining M&B shareholder discount vouchers, the nearest Harvester is approx 20 miles away.
My neighbour will miss the 'free' salad bar and other Harvester offers.

Adam Bower
Here we go again! Why this place has always had to have a theme to it is bonkers! For the added up costs of previous investments the place could have been knocked down and replaced with something that has even a slight amount of curb appeal and taste.

Bob Bracegirdle
When will it open?