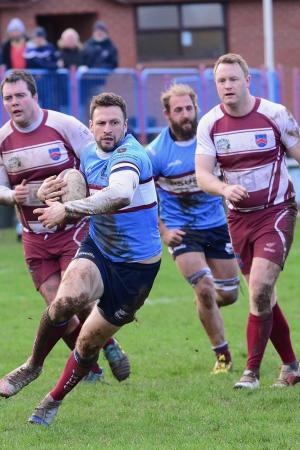 There was huge emotional relief in the Wolves changing room after this one. The players all knew they had let themselves down the week before at Rossendale and all week they had been intent on producing a performance against Wirral. 'It was a good week', said coach Rick Jones afterwards. 'Attendance at training on Tuesday and Thursday had been high, there was a full squad present on Thursday night, every one of the players had been asked in front of their team mates to say what they thought they could improve on, time keeping had been spot on and there'd been a good positive attitude all round. Individually, these are all little things, added Jones, but taken together they had made all the difference.'

In scoring seven tries to their opponents' six, it was Wilmslow's first win since September, only their second of the season, their first league points of 2019 and their first win against Wirral since November 2012. It didn't, of course, change their league standing but it will have given them heart for the last four games of this campaign.

It was also a milestone in the rugby career of Wolves full back Ben Day, who scored three tries to become the club's leading all time try scorer, surpassing Mike Tinkler's record which had stood for over forty years. Day started his rugby at the club as a six year old boy and made his Wolves debut in 2005/06. This was his 215th. game for the Wolves, during which he has now scored 110 tries. Tinkler himself was present on the terraces to witness the passing of the guard, as it were, and was one of the first to congratulate him afterwards.

Wirral had arrived on the back of a good season and were lying fifth in the league, the best of the North West sides, despite a couple of hiccoughs recently against Birkenhead Park in the Cheshire Vase and last week at home against Blaydon. They were missing a few of their stand out players to injury but those playing had all been in the squad from the outset of the season. They had cuffed Wilmslow at Clatterbridge back in November and would have expected to win today. Maybe they were over confident and were made to pay for a series of handling and passing errors. By the time, they got into full gear in the final quarter, it was just too late for them.

Wirral started the game with a penetrating run from centre Danny Harvey and with support runners on either shoulder an opening try in the first minute looked a certainty until the scoring pass was somehow intercepted for the Wolves to clear. Wirral were then judged to have thrown in squint at the lineout and from quick scrum ball a first phase passing move saw Ben Day intrude the line and to judge his pass to right winger James Coulthurst perfectly for the Wolves opening score, converted from wide out by Bob MacCallum. Ten minutes later, Wirral were again looking dangerous in mid field when a flat pass was intercepted by Ethan Harding, who ran in from half way for 14 – 0. Three minutes later, a further Wirral attack broke down in midfield when Coulthurst intercepted to race away for 21- 0. The fourth try duly came on the half hour, when Harding poked a kick through for a lineout on the Wirral line. The Wilmslow forwards eagerly contested the Wirral throw and knocked on but from the ensuing scrum Wirral were forced to carry over their own line. From Wilmslow's put in at the scrum, the 'ould firm' of MacCallum and Day combined to send the fullback bursting through under the posts.

The visitors would have had good reason to feel aggrieved at the turn of events, as in possession they always caused the Wolves' defensive problems and their troubles had all emanated from their own carelessness. They then fielded a kick ahead by the Wolves and ran it back to earn a penalty and lineout from which their flanker Mike Warren got their opening try. They then gave the ball away again deep in the Wilmslow half for Day to set off on a counter. There was still a lot to do but the passes went to hand, Coulthurst came in off his wing and slipped a pass to scrum half Sean Street for try number five and a healthy half time 35 – 7 advantage.

Wirral now had a not insubstantial wind in their favour but they obligingly spilt the ball in their first foray after the break. The Wolves countered and suddenly, there was Day striding away for his second score. His hat trick and record breaking try followed fifteen minutes later after Wirral knocked on at a restart, giving Wilmslow an attacking scrum in a good position.

By then though, the flow of the game had changed. Wirral No. 10 James Annetts had put in a telling cross kick for flanker Warren out on the left wing to get the touchdown for their second score. Annetts then quickly followed up with a smart break and scoring pass to Ben Brooks. Wolves winger Sam Cutts was then Yellow Carded for an unintentional spear tackle and this was the cue for a further three tries in the last fifteen minutes from the dangerous Wirral backs as winger Mark Williams, full back Chris Crowley and centre Sam Broadbent all crossed. Squeaky bum time for the Wolves was fast approaching but they then grabbed some possession in the final minutes and to the exhortation of their supporters and all round relief were able to play down the clock.

For sixty minutes, they had raised their game to restore some pride and self confidence, caught a complacent Wirral napping and had emerged on the day as deserved winners. True, the gloss came off their performance in the latter stages as the visitors started to play as we know they can but Jones was overall delighted with all his players. It's been a difficult time to keep them together, interested and motivated and this result was as much his reward as anyone else's.

Photo: James Coulthurst breaks away for his second try.