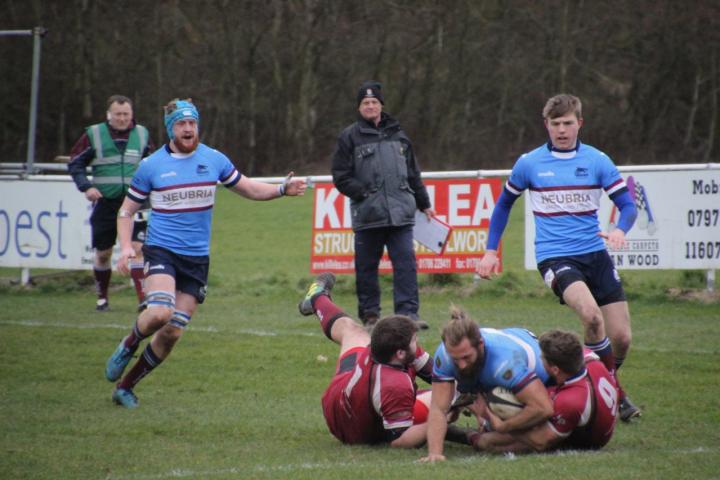 Wilmslow's wretched season continued with this nineteenth loss on a dreich afternoon at Rossendale's Marl Pits ground. Not many from Wilmslow bothered to make the short run up the M66 to support the Wolves. Whether they were discouraged by the prospects of lengthy roadwork delays as you approached Rawtenstall, of being blown about by a stiff and chilly South Westerly on the touchline or of the Wolves' on the pitch prospects, who knows?

The result here and elsewhere in the league made it a mathematical certainty that Wilmslow will be back in North 1 West next season. The players at their disposal have done their best and, to their credit, despite it all, have kept their spirits up but many of them have found Level 5 rugby a step too far. The Northern Premier bridges the chasm between Level 6 recreational rugby and the virtual semi professional game at Level 4 and upwards. It's a hard bridge to cross. In all team sports, promotion is normally accompanied by a strengthening of your playing resources but Wilmslow has had to rely on more or less the same squad of players that got them promoted last season, less a few stellar performers, who for whatever reasons haven't been available this season.

For their part, Rossendale have held down their position in this league for the past ten seasons. Man for man, they were just bigger, more athletic and more powerful than their Wilmslow opponents. There may have been at least seven or eight changes in their side from the one that had visited Wilmslow last November but those coming in were on the back of their second team side which had won the Cotton Traders Championship. All through the season, Wilmslow's forwards have matched their opponents in set piece and lineout play and this game was no exception. The difference was that with ball in hand the Rossendale outfit was always able to put a bit of pace onto the ball and to drive forward across the gain line in the tackle whilst in contrast Wilmslow's players were just not able to make the same impact when they had possession. Consequently, they eventually had to kick the ball down field to make any ground but either the kicks weren't sufficiently accurate or the chase wasn't hard enough and the outcome was that Rossendale's back three were able to recover possession at their leisure and to run back into the Wilmslow half.

Facing the wind in the first half the Wolves actually shared two tries apiece to trail by only 14 - 10 at the break. They were fortunate though to be still in touch as Rossendale had butchered at least two virtually certain scoring opportunities with handling errors. They had scored their opening try after ten minutes, when the Wolves got turned over at the breakdown in their own twenty two. For a while, there was a bit of ebb and flow to the game but Rossendale had always looked the more likely and their second try had its origins in a Wolves kick taken in space by Rossendale's back three in their own twenty two. Good running and passing created the space for a well created score. At this stage, half an hour in, the Wolves had barely emerged from their own half, until a penalty got them to a couple of metres of the Rossendale line where at the second attempt they recycled possession to eventually put blind side flanker Harry O'Loughlin in. A second try just before half time then came from an opportunistic interception by Ethan Harding on halfway.

With the wind now behind them, could the Wolves take advantage in the second half? After all, they were up against a side that, like them, hadn't won this year, which had slipped well down the league. On the face of it, this was as good a chance of breaking their duck as they were likely to get. Not at all! The Wolves could hardly get their hands on the ball in the second half as they faced wave after wave of ferocious attacks from the home side. Rossendale's handling, support play and ball retention against a stiff wind was accurate, precise and impressive. Wilmslow were forced into conceding a spate of penalties at the breakdown. Inevitably, the spaces opened up, constant tackling and tracking back becomes debilitating and Rossendale scored four tries to put the game out of sight. Three of them came in a ten minute spell midway through the third quarter. Wilmslow heads were now drooping and you sensed that their belief and fragile confidence was ebbing away, when their forwards went to sleep in the lineout on halfway. Despite it being their throw, nobody went for the ball which was fielded at the tail by Rossendale's back row and they were off again for what became their final score.

Only a late consolation from Sean Street, when the Wolves capitalised on a rare Rossendale second half handling error to produce some enterprising length of the field stuff, reduced the deficit. The Wolves then seized upon a loose ball in the last play of the game to go very close again but by then the result had been well wrapped up long before.

Photo: Kyle Mellor is well tackled as he takes on the Rossendale defence.