Rugby: Wolves put together strong performance in loss to Billingham 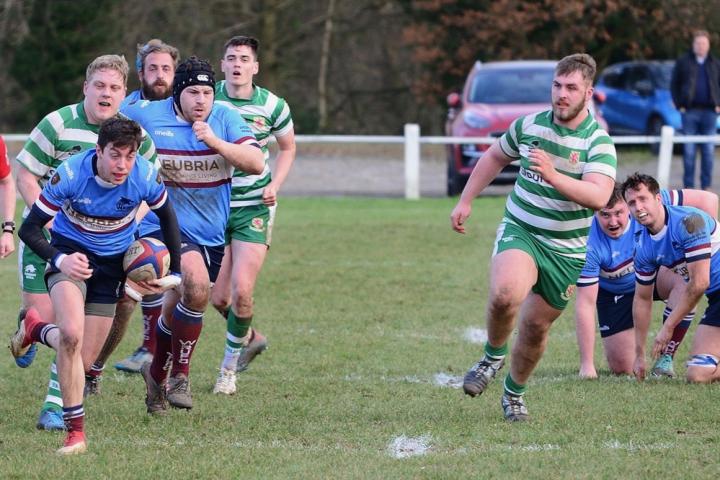 Let's disregard the final score line for a few moments. It barely reflects what was an excellent game of rugby. Second placed Billingham, of course, were the clear favourites and in scoring seven tries to Wilmslow's three, you couldn't argue that they weren't deserved winners. But these are only the headlines.

The visitors had emerged from the changing rooms like a tidal wave, a tsunami, or if you prefer 'beast from the east, which threatened for half an hour to sweep the whole of Wilmslow away without trace. The storm though blew itself out, as all storms eventually do, and by half time the Wolves, although nursing a 0 – 29 deficit, were hammering to get over the Billingham line.

Those few minutes, didn't produce any score but it gave them the confidence to believe that they wouldn't be blown away in the second half. During the week, coach Rick Jones had worked on the alignment of his players, getting them to stand deeper and to run onto the pass at pace instead of taking the ball flat and standing nearly still. It had the effect of enabling them to cross the gain line in the tackles and to release quick second phase 'go forward' possession. Suddenly the side's passing and handling was of a different order from anything so far seen from them this season. There was a new vigour and aggression about their play in contact and there were no more careless mistakes or turnovers against them. Players found themselves with a bit of space to take the ball and the whole dynamic of the Wolves play was transformed. It put Billingham on the back foot, which was compounded by a series of Yellow cards against them. At one stage they were down to just thirteen players on the field. It was hard to believe that we were still watching the same two sides that had played in the first half.

With ten minutes still to play, the Wolves had pulled it back to 19 – 29 and from the restart following their third try, you could virtually see the belief coursing through their veins as they sought the fourth try, which would have made the final plays very interesting. Billingham were now clearly rattled but they wouldn't have been second in the table if they didn't know how to pull themselves together at such times. The Wolves were then penalised on about halfway at the breakdown and Billingham's talisman, their No. 10, captain and lead coach, Peter Evans calmly put the ball into the Wilmslow twenty two. They may have been outplayed for the preceding thirty minutes but they now made sure that Wilmslow never got their hands on the ball again as they ran in two late scores to kill off any fancy ideas that may have been taking root in the mind of Wilmslow's players and supporters of an impending upset from the Wolves.

In the opening minutes of the first half, the Wolves had contributed to their own demise by kicking out on the full at the start and then at least twice more in quick succession, after having turned over promising Billingham attacks. Nevertheless, it was just too easy for the Teessider's speedsters to break the Wilmslow defensive line at will and no surprise when second row Ben Walton crossed after five minutes for their first score. The Wolves were being forced to try and slow the game down illegally at the breakdown and on the quarter hour a quickly taken short penalty put left winger Matthew Kirby in for the second try. The third came five minutes later from a scrum whilst Wilmslow's Ethan Harding was in the bin for a deliberate knock and with the extra man it was easy for right winger Alfie Lawson to score. Open side flanker Sean Richardson was soon over again for try number four and when the Wolves got penalised again for crossing, to end a promising run by full back Ben Day, another quickly taken short penalty released centre Luke Wilson for the fifth try. At this stage, the Wolves just didn't seem to have any answer to the sheer speed and pace at which Billingham played and you had to fear for the worst in the next fifty minutes. But the set pieces were solid and they kept plugging away. Wolves scrum half Sean Street then found space for a break, Billingham got penalised as they scrambled back and the half finished with five or so minutes of pressure from the Wolves as the home crowd found its voice to urge them on.

The second period started with Wilmslow's second row Kyle Mellor fiercely attacking the Billingham midfield. Jones had told them at the break to target Billingham's No. 8, Dan Dixon, who had been more or less permanently cavorting around in their back line. Mellor did just that and quickly recycled ball gave Day the chance to intrude from full back and to weave his way to the twenty two, where he offloaded to Street, who scampered away for the Wolves first try. We probably all thought that this would be only a temporary interlude before Billingham got into their stride again.

But no! A revitalised Wilmslow kept the pressure on. Mellor's fielding of the restarts was all determined defiance, Harry O'Loughlin at No. 8, in place of the absent stalwart Alex Taylor, was injecting some real pace into his running from the base of the scrum, Ollie Lee and Robert Taylor too were both prominent and finally a word about Conor McMurdock standing in at No. 10. You really couldn't have asked for anything more. It was tough for him initially to come to terms with the pace of what was going on around him but the little man with the big heart refused to be unphased by it and as the game went on his stature just grew as he worked out what he would and wouldn't be able to do. Billingham's No. 8 saw yellow for an innocuous looking high tackle on Ethan Harding, another yellow soon forward for not retreating ten metres as Wilmslow took a quick penalty, Adam Hewitt unluckily had a catch and drive try disallowed for one of those hard to see technical offences but soon after substitute back row Jack Masters took the final pass for the Wolves second try. Ten minutes on, the third try duly came. Harding's pass on the Billingham line was intercepted but it was only temporary relief as the kick out was fielded by Day, who with one of his typical runs created the opportunity for Lewis-Bundy Davies to run away and score.

The Wolves now had their tails up but when they got penalised at the breakdown, Billingham regained control for scrum half Connor Fewster and then substitute winger Joe Ross to get their final two scores.

Rick Jones doesn't like losing matches but he was delighted with his side's second half performance and no doubt also that his midweek training ground changes had made such a difference. Yes, it was an eighteenth defeat of the season but once again the players never threw in the towel during the first half hour and for nearly forty pulsating minutes at the end of the first period and well into the second half they had brought a smile back on to the face of Wilmslow rugby.