Lest We Forget: November 1918 Peace at last! 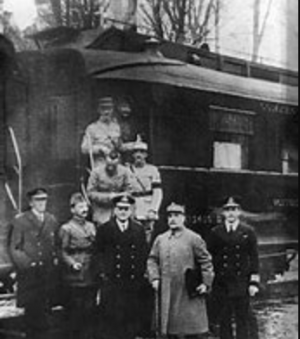 The Allies continued their relentless advance against a German army whose cohesion and discipline were quickly disintegrating. The Ottoman and Hapsburg Empires had already sued for peace on 30th October and 3rd November respectively. Valenciennes, Sedan and Mons (the scene of our first battle in August 1914) rapidly fell. On 3rd November the German High Seas Fleet was ordered out to fight one last climactic (possibly suicidal) battle, but mutinies in Kiel and Wilhelmshaven stymied this plan. From then unrest, strikes and revolution spread. The country was already on its knees suffering from malnutrition, Spanish flu, shortages and nearly 1 million civilian dead.

President Wilson let it be known that only an Armistice based on his 14 points was possible but that negotiations with the enemy's autocratic, militaristic government was not to be allowed. The new Chancellor Prince Max von Baden (and even Hindenburg) saw that the Kaiser no longer commanded support of the army and he unilaterally announced his leader's abdication on 9th November. Wilhelm II then in Spa, Belgium sought refuge in neutral Holland where he remained until his death in 1941. Von Baden now passed the poisoned chalice of Chancellor to Friedrich Ebert, the leader of the Social Democratic Party. Germany was now a republic. A four-man team led by Matthias Erzberger (but tellingly with no military personnel involved) crossed the lines and met Foch's team in his railway carriage in the Forest of Compiègne. The truce was signed at 5.00 am on 11th November and all hostilities ceased at 11.00 am.

Adolf Hitler of the 16th Bavarians, in hospital in Pasewalk recovering from a British gas attack near Ypres in October, wept uncontrollably when he heard the news. He was convinced that the military had been "stabbed in the back". By the 26th all German troops had left occupied France and Belgium.

We continued to fire up to the last minute losing nearly 11,000 casualties and 2,738 dead even on the 11th. Our community lost 8 young men this month, including one on the 11th.

On the 2nd Corporal Francis Lloyd of the Machine Gun Corps (6834) died aged 27 at his family home on Peacock View, Handforth. He is buried in St Chad's graveyard and remembered on the new local memorial. Before the war he lived in Grimsby and originally served as a professional soldier with the East Yorks.

Wellington Cemetery, Rieux-en-Cambresis contains the grave of Private John Mansell of the 9th Cheshires (48829) who was killed in action on the 4th, aged 35. Born in Liverpool, he was a piano tuner living in 1915 with his wife Emily and 2 children at "Anfield", Wycliffe Avenue. The parish church and civic memorial mark his passing.

The same memorials mark the passing of Driver George Worth, who died aged 26, also on the 4th, serving with the 2nd Train division of the RASC (T3/028074). In 1911 working as a coal merchant's carter, he lived in Strawberry Lane with his parents and 4 siblings. He is buried in Rocqigny-Equancourt Road British Cemetery.

St John's Lindow and the Alderley memorial record the death aged 23 of Private Reginald Burgess of the1st/7th Cheshires (291059) who sadly died on Armistice Day. His mother Mary had died in 1905 so in 1911 he was living with his grandfather Thomas at 55 Brook Lane and working as a stable hand. His last resting place is the Terlincthun British Cemetery, Boulogne.

Four local lads were to die of wounds in November after the conflict ended. On the 24th Sergeant James Goldstraw passed away aged 24 at home, having served with the Army Service Corps, MT depot (M404465). He is interred in Wilmslow Cemetery and remembered in his home village of Styal and in St Bart's. He lived in Rose Cottages, Styal and had been employed as a market gardener.

Before the war, Sapper Leonard Booth worked as a booking clerk for a railway company and aged 18 joined the Railway Operating Division of the Royal Engineers. He lived at Davenport Green, but died on the 25th far away in 33 CE Hospital, Haifa Palestine. He is buried in a nearby cemetery and remembered at St John's and the civic memorial.

Two days later Private Harold Johnson, aged 31, died of pneumonia in the 17th General Hospital, Alexandria. He had served with the 2nd Welsh Fusiliers (72085). Before the war he lived at 34 Oak Cottages, Styal. He left a widow Kate and 1 son. The village memorial and Methodist Church mark his passing.

The last fatality of this momentous month was Driver Bernard W Rawson, aged 29, of the 524th Heavy Brigade Royal Field Artillery (118689). He worked as a gents outfitter and had been married to Marion, having 1 daughter. They lived at Fitton Terrace, Chapel Lane. He is buried in St Bart's churchyard and is remembered in the church and nearby memorial.

Photo: Railway carriage in the Forest of Compiègne.

Pete Taylor
The final chapter; thank-you so much for this fascinating epic tale.

Bob Bracegirdle
You cannot believe that fighting continued until the very last minute.