Lest We Forget: October 1918 The final advance gains pace 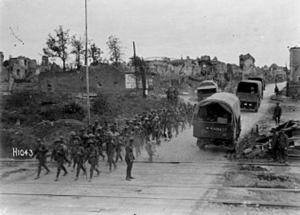 The Allies now mounted intolerable pressure on the enemy on all fronts by undertaking a series of closely phased offensives with marked local superiority and for limited objectives. The Germans were outfought at all levels. Many famous tactical and strategic points fell into our hands: the Belgians took Zeebrugge and Ostend; the French St Quentin, Laon and La Frere; we regained Armentières, Le Cateau, Cambrai and Menin.

Elsewhere Germany's allies were collapsing. Bulgaria had already sued for peace The Turkish army, weakened by famine and desertion, retreated in Palestine and Syria before the numerically superior land and air forces of Allenby - Damascus, Sidon and Tripoli all fell. On the 31st Turkey sued for peace and all hostilities ceased. At the battle of Vittorio Veneto on the 24th, the Italians significantly supported by British, French and American troops crossed the swollen Piave river and entered the Venetian plain. The Hapsburg Empire was now disintegrating faced with exhaustion, food shortages and unrest amongst political and ethnic minority groups.

It is perhaps unfortunate that the outstanding success of August - November 1918 has often been overshadowed in popular memory by the years of grim deadlock which preceded it.

These magnificent advances, however, exacted a heavy toll. With victory in sight our community lost 15 young men - one of the two worst monthly losses we incurred in the entire war. (The Somme in July 1916 also took 15.)

All of our fatalities are remembered locally in churches, on memorials and in graveyards often in more than one place. They are also either buried abroad near where they fell or commemorated if they have no known grave. (They are from Wilmslow unless otherwise stated.)

Pte Arthur Sumner; 10th; aged 40, a gas stoker at gasworks opposite Waitrose; Mill St; died whilst returning from Ireland with 500 others, when RMS Leinster was torpedoed; no known grave.

Marcia McGrail
They were ordinary - a gardener, a labourer, a porter, an architect, a gas stoker etc - men and boys who were asked to do extraordinary things in a foreign land.
A whole generation. Wiped. Appalling treatment. Yet even those that returned were not treated any better. This generation is unworthy of them.

Caroline Barker
Thank you for the research and effort put into producing this series of articles (both here and on Alderleyedge.com) which I have found really interesting. Are there plans to publish the information once the official commemoration period comes to an end in November?

Pete Taylor
This has been an incredibly interesting and informative series; thanks for sharing it with us.