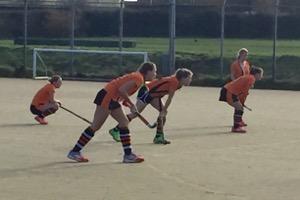 Wilmslow welcomed second placed LIndum, from Lincoln to Oakwood Farm on Saturday and provided the crowd with a game played at breathtaking pace and with a dingdong scoreline.

For the fourth week in a row Wilmslow started the game with high intensity pinning Lindum back with youngsters Armstrong, Davenport and Hallinan working hard in the press. The first breakthrough came after 10 minutes with a pass from midfield into Hallinan on the top of the D who then turned and hit the ball through to Boddy in front of the Lindum goal which he then slotted home.

Lindum levelled the scoring in bizarre circumstances, a short corner drag flick was fired at the goal, post man Wright blocked the ball with his stick but it somehow looped up in the air and landed behind him in the goal.

Within a minute Wimslow were back on top. A mazy run by Cam Armstrong along the baseline was pulled back to Boddy who deflected the ball home again for his and Wilmslows 2nd goal.

Right at the end of the half Lindum won a short which jangled the crowds nerves but the shot was well saved.

Wilmslow maintained their intensity in the second half limiting Lindum to hopeful aerials out of defence due to their strong press.

After 10 minutes Wilmslow won a short corner, the ball was dragged out to Hallinan on the top of the D he slipped it left to Cooper who lifted the ball into the goal over the on rushing keeper. 3-1 to Wilmslow.

They had a chance to go further ahead when Hallinan was taken out by the Lindum keeper who conceded a penalty flick. The keeper atoned by making a good save.

Lindum then had their best period of play bringing a number of good saves from goalie Si Pickering before finally converting one of their short corners. Another goal quickly followed to make it 3-3. Lindum continued on the offensive and another short corner made it 3-4 to the visitors.

With 2 minutes to go Wilmslow piled forward looking to get something from the game. Their prayers were answered with 30 seconds to go when Lindums biggest player on the pitch made a clumsy body check 'tackle' on Wilmslow's youngest and smallest player Cam Armstrong resulting in a penalty corner being awarded. The ball was pushed out and stopped perfectly for man of the match Bastiaan Steffens to drag flick the ball into the back of the net .

2nds beat Timperley 3rds 6-1 away from home with goals from Eden, Bonner and a hattrick from James Bell. Wilmslow 3rds beat Oxton 5th, away 4-0 to stay top of their league and the 4ths stayed solidly in second place after a 10-1 win against local rivals Alderley Edge 7th. The 5ths were the only tangerine team to lose, against Timperley 6th.

This Saturday saw Wilmslow L1s brave an early morning trip up the M60 to face Bolton 1s in their first 'top half' challenge of the season.

The hosts held possession for less than a minute before Emilie Kelman intercepted a loose pass to drive down the line and into the D. A series of Wilmslow attacks followed with a midfield of Walters, Westbrook, Harrison and Coulson linking nicely with pacey Troup, Healey and Law.

A goal was not forthcoming despite wave after wave of attack and after just 5 minutes, an unusual momentary lapse of concentration in defence led to a breakaway goal for Bolton. Undeterred by this, the orange attack continued to batter at Bolton's defence which held strong through a series of short corners and D penetrations.

1/2 time came with the score still 1-0 and it was up to coach Andy Hunt to give a brutal yet inspiring team talk.

The reinvigorated defence of Keira Flemming, Charlotte and Hannah Kelman repeatedly transferred the ball seamlessly to create more attacking opportunities for Loughlin, Hall and Senior. Their well timed tackles also ensured keeper Lang was only called into action a couple of times.

With time ticking away, it looked like the visitors would leave empty handed. However, with 5 minutes to go, skipper Charlotte Kelman was offered too much time at the top of the D and spotted a hole in the Bolton defence as she drove the ball into the backboard to equalise at 1-1. In scenes reminiscent of Nou Camp '99, another rapid attack followed finding younger sister, Emilie poised to slot the

winner home at the back post with less than a minute on the clock. Jubilations all round for the visitors with a 1-2 victory snatched from the jaws of defeat.

Next week sees the squad head to Crewe for another very tough game.

Ladies 2nd retain top place in the league despite being held to a 0-0 draw at home by an energetic Golborne 1st team. The 3rds had a good 4-1 away win against Triton 2nd to keep them in the right half of the table and the Ladies 4ths continue to be the surprise package of the season with a 3-1 win against Triton 3rds.