Rugby: Wolves are outplayed by a strong Vale team 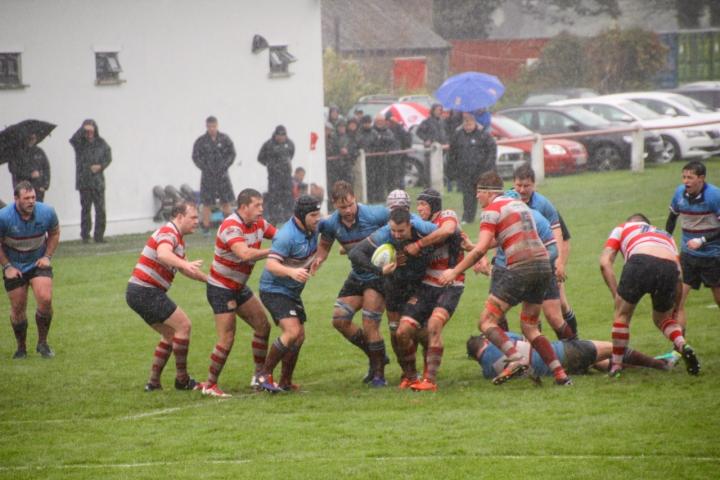 Storm Brian was already blowing vigorously down the Powderhouse Lane ground when the players of Vale of Lune and Wilmslow took the field. Forty minutes later, it had worked itself into a frenzy, spitting out its venom directly into the faces of the Wolves players, who had the misfortune to be facing it in the second half. If you were to ask them, however, what had inflicted the most damage on them, they would surely tell you that it hadn't been Storm Brian at all; it had been Hurricane Hall.

Vale's No. 14, Damon Hall, had already scored fifteen tries in six outings this season and he added another three to his tally in the second half of this game. Add another eleven points from his boot and his contribution to Vale's total was twenty six points alone. The Wolves weren't the first side to have no answer to his prodigious try scoring this season and it's a safe bet that they won't be the last either. Hall came through Vale's junior section, then went away to college for three years or so before returning to the club where he grew up. He was a danger the whole time. With ball in hand, he always made ground and inevitably it took more than one defender to stop him and as the Wolves discovered he didn't always need possession of the ball to score. Vale now have seven straight wins this season and they have a look of a side that has plenty more in the locker, come hail, high water or anything else the elements throw at them.

After a promising start to the season, the Wolves have now lost their last three games, all of them on difficult wet afternoons. As winter approaches, they can expect more of these conditions and they're quickly going to have to come to terms with them if they're going to stop the rot. Their set piece play in scrum and lineout was once again pretty solid. They nicked a bit of lineout ball on the Vale throw and more than once had the Vale scrum in some discomfort but this is only part of the game and in other aspects, they were just shaded by a Vale side, who were generally a bit quicker and better organised as a unit at the breakdown, more accurate with their passing, with a bit more pace, full of confidence and in Hall knowing they had a proven match winner. In contrast, one couldn't help feeling that the Wolves tended to play more as individuals, standing off, a bit too high, not going in as a unit and consequently some of their best moves broke down because their ball carrier got isolated.

The Wolves actually led by 17-12 at half time. They had scored a well worked 'catch and drive' through hooker Alex Donaldson on the quarter hour and just before the break full back Ben Day joined the line after the pack had recycled the ball to crash over for a second score. Bob MacCallum converted both tries and landed an early penalty. With the elements in their favour though, they really needed a couple more scores in this period to give themselves a decent chance. They had enough of the play and territory to create the chances but got themselves turned over at critical moments. It didn't help either that Vale broke away twice to score, firstly when prop Jack Ferguson held off the defence from a breakdown on the Wilmslow line and secondly when Wilmslow conceded a penalty in a promising attacking position. Vale took it quickly and Jordan Dorrington weaved his way through an unprepared defence from his own half for a good opportunistic score.

The second half was all Vale. The storm was now behind them and they simply kicked their possession down the field for Hall to chase after. He scored two tries in quick succession to settle the match after about fifty five minutes, kicked an imperious conversion from the touchline and then added a penalty. At 29-17, the Vale were to all intents home if not dry. In the last few minutes, No. 8 Sam Wallbank broke from the base of a scrum for the fifth try before Hall had the final word from yet another kick and chase. It had been a very effective tactic, well placed kicks swirling around in the wide open spaces, causing mayhem in the Wolves defence with Hall leading the chasing hordes. The Wolves just had no answer. They couldn't get close enough to the catchers at the restarts to stop the kicks raining down on them and when they did have possession, which was never for long, they couldn't make any headway against the wind and rain and, most importantly, a tenacious Vale defence.

Out played and out thought by a very good Vale team would have to be the verdict!

Adam Hewitt tries to get through both the Vale defence and Storm Brian with Tom Bull and Alex Donaldson in support.