Guild Players to stage over the top comedy 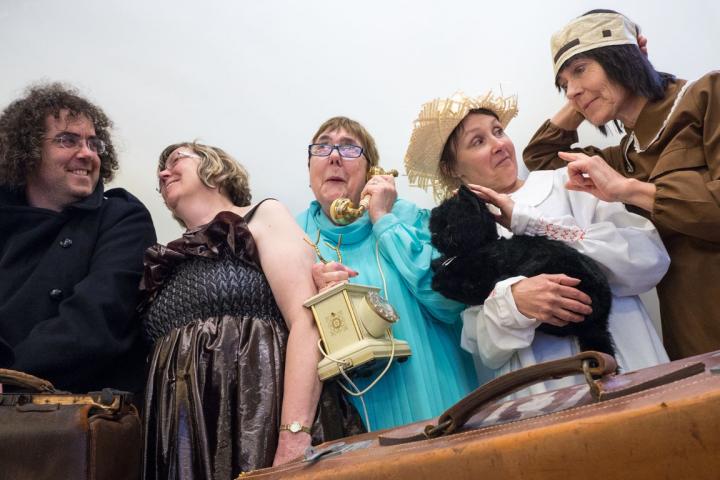 Wilmslow Guild Players' next production is an over the top comedy with an equally over the top name. 'The Haunted Through Lounge and Recessed Dining Nook at Farndale Castle', by David McGillivray & Walter Zerlin Jnr. runs from 25th to 28th October at Wilmslow Guild, the adult education centre on Bourne Street.

"We're tending to just call it Farndale Castle," said publicity officer Bill Beton, "but despite an unusually long name, this is a riotous comedy, close in many ways to pantomime."

The play focuses on the exploits of the Farndale Avenue Townswomen's Guild Dramatic Society, a struggling amateur theatre group run by the formidable Mrs Reece. In this zany comedy they make a spectacle of themselves and their harassed producer in order to tell the tale of Marty and June: two lovers who come upon Farndale Castle after their car breaks down. Vigorous sound effects enhance their spine chilling mystery production, a tale of murder and mayhem that is guaranteed to bring down the house, or at least a substantial part of the set.

The Players chose this play because of the success of the last play in this series: 'Farndale Avenue Housing Estate Townswomen's Guild Dramatic Society's Production of Macbeth', which they performed back in 2011. "There are about a dozen plays in the series," said Mr Beton, "all of them with extravagantly long names!"

The play is being directed by long-standing Guild Players member Grace Reed. "The play is again about the enthusiastic, but incompetent ladies of the Farndale Townswomen's Guild who think that they are performing a public service," said Grace. "All the characters are larger than life and think that they are Oscar material. We have had a great deal of fun at rehearsals and hope that our audience realize that all the things that go wrong are completely intended!"