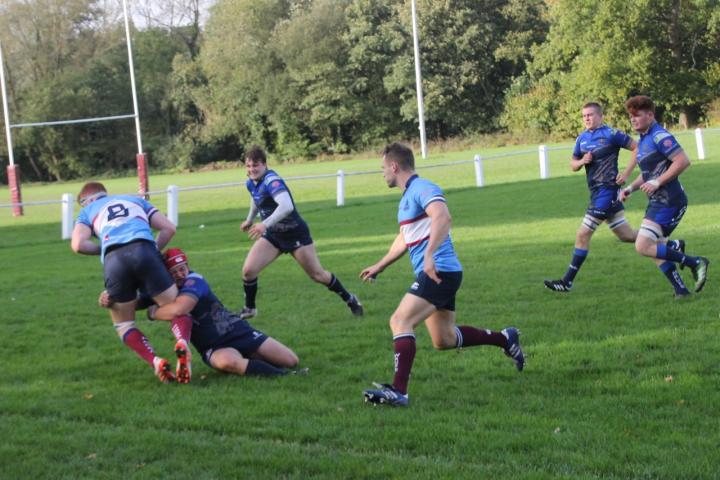 An exciting first round game in the region's premier cup competition between the second strings of Wilmslow and Macclesfield produced nine tries, five for the home side and four for the visitors. With just ten minutes remaining, the Vikings were coasting comfortably and deservedly towards a 33 – 7 win but Macc brought on some pacey fresh young legs and suddenly the whole tempo of the game changed. Three tries by the Macc replacements, all converted, in rapid succession, made the last play of the game very interesting. The Vikings though managed to secure the vital turnover and there were sighs of relief when they put the ball out of play. Why it took Macclesfield so long to raise the pace and tempo of their game is a question that will probably remain unanswered.

Given the recent history of clashes between these two sides, one wonders whether it is a sign of a swinging pendulum. In recent seasons, Wilmslow Vikings have been no more than cannon fodder for the Lions, who finished second in last season's Cotton Traders league Conference A, whilst the Vikings just couldn't cope at that level and finished last season in the lower echelons of Conference B. This season the Lions have won only one of their five matches in the Cotton Traders premiership, compared to the Vikings unbeaten record in the Cotton Traders Championship. And the result of this game was no fluke either. The only doubt was how the Vikings came so close to throwing it all away in the closing minutes.

Wilmslow coach, Rick Jones, is in no doubt. The Vikings players are training harder and putting much more effort into their game than in recent seasons. They have brought in youngsters through the club's own junior section and through Wilmslow High School. The two go together. Taught the game better at school in recent years and developed in the club's junior section, there has been an inflow of talented young players to the senior section. It takes time, of course, for teenagers to develop in a man's game but, make no mistake, this was probably the most significant result for the Vikings in recent times and possibly for Wilmslow Rugby Club as well.

After absorbing early pressure from the Macc side in the first fifteen minutes without undue alarm, the Vikings got into their stride. Centre Louis Bundy-Davies was first on the score sheet when he brushed aside a weak attempt at a tackle on the Macc 22. Two more tries followed from 'catch and drive' territory by Adam Taher and Conor McMurdock, both of whom have never played better. Macc hit back from a short penalty move just before half time to make it 19-7 at the break.

The Vikings had much the better of proceedings in the first thirty minutes of the second half, deservedly adding two more tries. Winger Sam Beckett got the first of them by coming in off his wing to finish off a period of Vikings' pressure. The fifth try followed immediately when flanker Josh Whitely made ground from the restart before releasing full back Rick Muckle for a dash to the line from halfway.

At this stage, you couldn't see a way back for Macc but you would have been wrong. Up to that point, they had failed to make anything of their possession. Their lineout had been uncertain, their ball retention on the ground vulnerable and their passing wayward. Their coaches then did what coaches are supposed to do and brought on a pair of youngsters, presumably to see how they would make out in what was apparently a losing cause. Maybe the Vikings were now running out of puff and were holding on to the ball on the ground or lying over it too much. Referee Steve Heaney wasn't about to have any of that, the penalty count against them mounted and all of a sudden Macc got three tries from open play to set up a nail biting last few minutes.

Next week, the Wolves face unbeaten vale of Lune at Powderhouse Lane in Lancaster and the Vikings have a blank weekend before resuming in the league against leaders Lymm on the 28th.

Photo: Vikings No. 8 Charlie Gardiner is hauled down on the Macc 22.