Parents to sit down in protest against school budget cuts 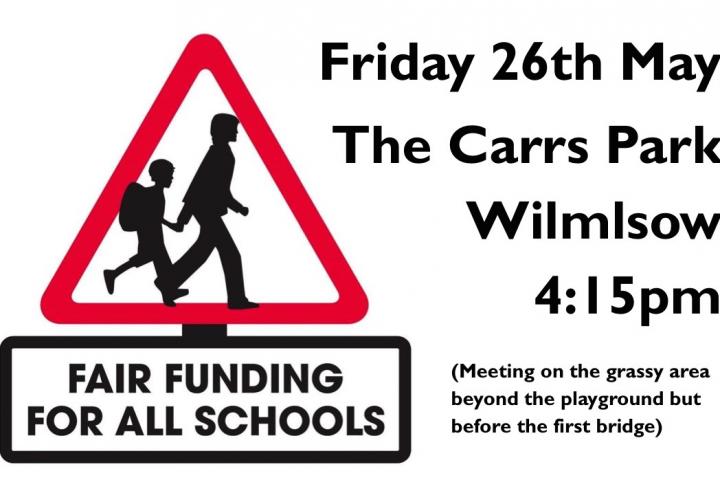 Parents and school community members are holding a 'picnic in the park' sit-down protest against the government's proposed school budget cuts.

Fair Funding for Schools, a parent-led group, will be gathering for a picnic in Wilmslow's Carrs Park at 4:15pm on Friday, 26th May. They are encouraging local parents to bring a picnic and sit with their school and make a placard with a creative slogan.

Ms Clare Daniel, Headteacher at St Anne's Fulshaw CE Primary School, said "Parents from Cheshire East have already been highly engaged with the Fair Funding campaign from the very beginning, with 5% of all the national funding formula consultation responses coming from Cheshire East. Parents, pupils, governors and staff have also taken part in marches and protests in Nantwich, Sandbach, Chester and even Manchester. Clearly parents are aware that Cheshire has been one of the poorest funded authorities for many years, and the initial national funding formula proposals would have seen us right at the bottom of the funding pile, hence the vocal response.

"We had already planned a picnic in the park at The Carrs between 4.15pm and 4.45pm on Friday 26th May, however after the terrible events in Manchester on Monday evening, election campaigning was suspended and this included associated Fair Funding events such as our picnic. Campaigning is due to start again tomorrow and so many of the events that had been planned, then suspended, are now taking place again.

"The tragedy in Manchester has obviously cast a long shadow over us all. We have spent much time over the last three days debating whether it was appropriate to proceed, however we have agreed that we should. This will enable our community to come together, both as symbolic support for those affected by the bombing, and also to enable those parents who have been so engaged with the funding formula consultation and also with other marches and protests to express their support for the Fair Funding Campaign in their own locality."

Ms Daniel added "Our event is politically neutral, in line with the other Fair Funding events around the country, with the focus being on all the amazing things our schools offer which could be at risk should school funding cuts not be adequately addressed by whichever party is in power post-election. It will be a very informal community get-together, and will open with a minute's silence to remember all those whose lives have been affected by the bombing this week, followed by a few speakers. At 4.45pm we will walk into the centre of Wilmslow after which we will begin a much needed half term break.

"Everybody is very welcome, those from schools in our local area and beyond if they are able to make it. Those attending are welcome to bring a picnic, a placard or banner and some sun cream as the weather forecast is super!"

Protestors will be meeting on the grassy area beyond the playground, before the first bridge, in The Carrs at 4.15pm on Friday, 26th May.

Manuel Golding
The case for Cheshire East school funding is surely to be laid at the door of the council.
Just look at the wastage of money, our money, that must be squarely pointed to CEC's
arrogant, money wastage. Where does one start? Lyme Green, employing & over paying incompetent senior officers with their outrageous money grabbing severance pay-offs,
ill conceived "money saving" council owned "businesses" that result in mega losses, by-passing the statuary contract requirement, millions wasted on the ill conceived Local Plan (which has resulted in countless appeals all costing hundreds of thousands & which could have been saved if the original LP had been correctly conceived, that is planning conceived rather than politically conceived by the leadership & lackeys.
One could go on as the pit is frighteningly deep.
Money wasted could and should have been used for our schools, elderly care, roads etc. Rather than blame the Government, I sense a degree of political opportunism here, I suggest the problem is at our own doorstep in Sandbach..

Birgitta Hoffmann
In a time, when the importance of skills and knowledge to meet the challenges of the future is a mantra to most politicians, it is deeply cynical to find anybody implementing such huge cuts to education.

Do the Conservative not want our children to have successful careers and become tax payers in the future? This will not happen, when we skimp on primary and secondary education.

Given that this happens in front of a background of the first of the large new housing estates being ready to be occupied by their new owners and their with school age children on the one hand and on the other there being no shortage at all to award huge pay increases to the senior managers at East Cheshire Council out of the self-same tax coffers,

one has to ask whether there is any brain cell at work in the middle of so much short-sighted self-interest.

Pete Taylor
And yet these same parents will, like robots, be ticking the Conservative box again in a few days! George Osborne made these "savings" as your representative.
Interestingly, with his new hat on, he seems to now be saying that his former colleagues are clueless.

Debbie Jamison
FairFunding alliance you are not telling the whole story re how this 'unfair' funding proposal has come about. If you did you would not be 'politically' neutral. The funding review was set in motion by the former Tatton MP, aka six jobs. It was necessary because when the Government started its drive towards Westminster direct funded academies it had to offer early sign up bonuses and they were so attractive the workload was overwhelming for London officers. The burden on the national educaction budget was also recognised as was the unfair allocation of resources to academies over local authority schools. A natural consequence was that with so much money being taken away from local authorities, they no longer could afford to run their 'support' services for education. ( CEC I know - joke- noone too bothered about them being taken out of the loop- recetnly appointed 25yr old as portfolio holder for children & families services) So National Government had to use its funding review to reduce the allocation of money to schools. Meanwhile, here in Cheshire we are planning 36,000 new homes and no plans for where and how the new school places are going to be provided. What a car crash! Drivers George Osborne & Michael Gove. So I say again - you are being niave in being politically neutral. You need to lobby and get a U turn by weak & wobbly party!