Have your say on final amendments to Local Plan 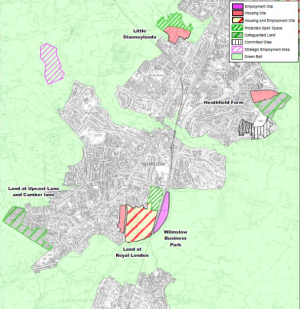 Cheshire East Council's Local Plan takes another step towards adoption as consultation begins on the final amendments to the blueprint for the borough's development.

The consultation on 'main modifications' to the Local Plan has been called by Planning Inspector Stephen Pratt and will run for six weeks from February 6th to March 20th.

There are no major modifications for the proposals for 900 new homes in Wilmslow by 2030, which includes: 175 at Royal London (around 80 on land to the east of the existing campus, around 20 to the north of the existing campus and around 75 on land west of Alderley Road), 200 at Little Stanneylands and 150 at Heathfield Farm with 97 listed as being completed and 305 having already been committed by March 2016.

However, campaigners feel these are out of date figures which will result in considerably more houses being built in Wilmslow than required in the Local Plan.

David Lewis of Residents of Wilmslow said "Cheshire East Council are still using figures for completions and commitments to March 2016 which are now almost a year out of date.

"Since March 2016 a considerable number of commitments have come forward - many of them windfalls - the result is that there will be a gross over-provision of houses In Wilmslow by 2030 if all the sites allocated are built out, well over 1,000 compared with the 600 called for in the plan."

In Handforth the expected level of development is 2200 new homes including 250 on land between Clay Lane and Sagars Road and 1500 at the North Cheshire Growth Village, located off the A34 opposite Handforth Dean Retail Park, with 70 listed as being completed and 323 having already been committed by March 2016.

This further consultation follows nearly three years of public comments and submissions on the council's proposed strategic blueprint for the borough's development to 2030. Most recently the Local Plan underwent a further six weeks of examination hearings, which ended on October 20th 2016.

In December, Mr Pratt wrote in a report that the locations and extent of development proposed in the plan seem "appropriate, justified, effective, deliverable and soundly based". He also said that issues relating to other strategic policies in the plan "seem to be capable of resolution by modifications".

Mr Pratt added that the council's further proposed changes to the Local Plan seemed to address the changes "necessary to ensure that the revised plan is sound and legally compliant".

Councillor Ainsley Arnold, cabinet member for housing and planning, said: "It is gratifying to see our Local Plan moving forward firmly towards adoption. The plan is the council's most important tool for shaping development in Cheshire East to 2030 and I am pleased the hard work of our officers and members has paid off.

"This will be the eleventh round of public consultations and this Local Plan is one of the most consulted on in the country. There has been unprecedented interest in the consultation process and I'm sure this engagement will have allowed everyone to feel they had the opportunity to have their say."

Cheshire East Council received a total of more than 60,000 responses in the 10 previous consultations on its draft Local Plan. This represents an unprecedented level of interest in a council consultation process.

Inspector Pratt acknowledged in his closing remarks in his report in December 2016 that 'this has been the most complex and challenging Local Plan I have ever examined' – having completed 20 or so examinations to date.

You can take part in the consultation online via this link: www.cheshireeast.gov.uk/localplan from Monday, 6th February.

The Site Allocations and Development Policies Document (SADPD) - which is the second part of the Council's Local Plan - along with the Issues Paper and Revised Sustainability Appraisal Scoping Report are also proposed to be published for six weeks public consultation shortly, subject to the Portfolio Holder's agreement at his meeting on 20th February.

The SADPD will provide development management policies and make further site allocations as necessary to meet the overall development requirements established in the Local Plan.

This consultation will be supported by a 'call for sites', providing an opportunity for landowners and developers to put forward sites to the Council that they consider are suitable and available for future development in the Borough - for housing, commercial, employment or other development. These will generally be 'non-strategic' sites - which means sites of less than 150 homes or 5 hectares in size.

Julie Green
"Call for sites from developers and land owners?" Note the public's call for the various brown field sites to be sorted out has been mostly ignored... Look at the number of those in Macclesfield.
"One of the most consulted local plans in the country..." - waste of time really. Have your say but get ignored anyway...
Yes we need new houses in this country but as we all know, most of those being built on predominantly green field sites are not aimed at those trying to get on the housing ladder, but rather 3 to 5 bedroom homes so those who already have a home can play musical chairs whilst the first time buyer is still left out.

Nick Jones
@ Julie; Well summarised; Brown field costs money to develop... New green field development is VAT friendly ..therefore cheaper ... If you check these pages you will identify our elected representatives voting to build on green belt ... 'Ignored' is too mild a word... When is that election ??

Peter Davenport
What I think remarkable about all these plans is the question, WHERE IS ALL THE SEWAGE AND SURFACE GOING TO GO?
It is patently obvious that the sewage from Handforth and Wilmslow all goes to Wilmslow Waste Water Treatment Plant or sewage farm in english. No doubt I am not the only person to see the large tanker wagons of United Utilities going through Wilmslow to the Sewage Farm at Alderley Edge daily, which only can be transporting surplus sewage from one place to another, as the present capacity at Wilmslow is too little. Also Bollin Park development have asked to release the sewage etc earlier than at first given.
Seeing what is projected by the large numbers of houses in Wilmslow and Handforth, has this been foreseen?
And also do not forget that Greater Manchester are going to build 2200 houses at Woodford, which are near the river Dean, which would provide and easy pipe run to Wilmslow's Sewage Farm, as it is on the Dean, but a very restricted site

James MacDonald
Their motto, build the houses and the new services will follow.

Reality, build the houses and the existing services will suffer.

DELETED ACCOUNT
I really don't know why Cheshire East is so pleased with themselves over this plan. As far as I can see they have given in to every demand of developers. Take the Heathfield Farm allocation as an example. The entrance to this proposed site was directly on the roundabout. Much stamping of feet by developers and what does Cheshire East do, - but shift the entrance to the other side of the roundabout - to make it easier when they want to develop the safeguarded land. That is not a negotiation - but a capitulation.

At the end of this whole process I will only have one question. How much did it cost them to get a London QC (not even a Manchester one who could have lived at home), to attend for the entire sessions of the last round of the Local Plan Examination. Will this be another set of accounts of redacted information?

Terry Roeves
Hundreds and hundreds more pages to read, with so little time. Vast majority of public will not bother, because views have been and continue to be ignored. CEC and developers have already decided our future.
I'm sure that, as before, experienced staff at Residents of Wilmslow will take the time necessary to review and comment to the Inspector. What other party can help us residents? I don't see one at the moment. We really do need more Independent Cllrs for checks and balances.