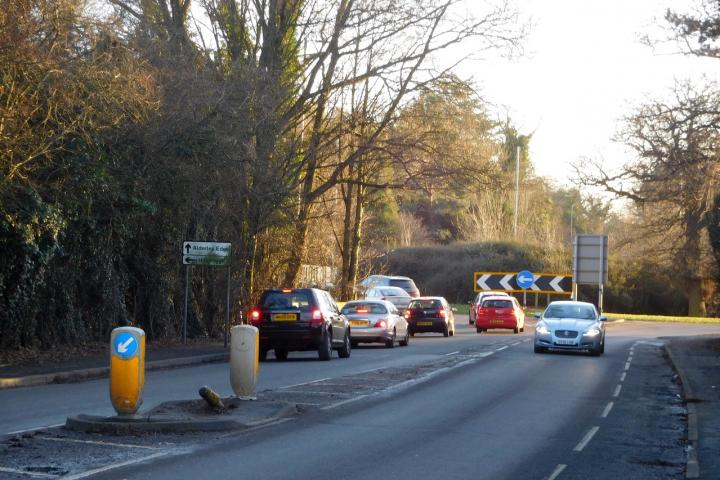 Cheshire East Council is currently consulting on its Pre-Budget document, which sets out proposals to save £94m and balance the books during the three year period from 2017 to 2020.

In addition to proposals to cut costs, the report contains new infrastructure projects and other proposals designed to open up opportunities for businesses and create jobs.

Included in the Pre-Budget Consultation is a proposal to spend £1.2m improving the Alderley Road and A34 junction and access for pedestrians.

The report states "The junction between Alderley Road and the A34 in Wilmslow adjacent to the Royal London site acts as a pinch point in the highway network with regular congestion occurring, particularly at peak times associated with the adjacent existing employment site traffic.

"The proposal is to widen the Alderley Road approach to the A34 roundabout, adding an extra lane, to increase junction capacity. Additionally, it is proposed that associated improvements to pedestrian and cycle access to the adjacent existing employment site are provided to encourage access by means other than car.

"The aim of the improvements is to reduce congestion on the highway network by increasing capacity and reducing traffic to and from the employment site."

Councillor Rod Menlove said "Proposals for highways improvements for pedestrians, cyclists and drivers are always welcome and particularly so for this traffic congestion area.

"Three lanes at the roundabout is a given and it must be at least two lanes from the Royal London exit plus allowing for the right turn in to Fulshaw Park South. It also gives the opportunity to resolve any outstanding street lighting and drainage issues."

What do you think about the current situation at this junction and the proposals? Share your views via the comment box below.

Nicole Regan
I would like to know how this 20 zone will be monitored? There are many knutsford road users who take the bend near the school over 40 mph and just continue to do it how will a 20 zone stop this. Also the customers of the corner shop who park without considering anybody trying to cross the road will double yellows be put in to stop this ? Its good that steps are being made not sure its enough though.

Barry Stafford
About time.Get rid of the silly bollards in the road after Fulshaw entrace ,so that two lanes carry on from the traffic lights to the A34, Many holdups at the A34 from Wilmslow along Alderley Rd are the dozy ,lazy drivers who never indicate to go left. Coming off the roudabout, I never realised how many vehicles are not fitted with indicators.. Assume an optional extra on new 4x4 and vans.If drivers indicate. We can go left onto the A34 .Instead we wait patiently for a gap in the traffic.Only to find many cars go left towards Wilmslow.Having not pulled down that little lever behind your steering wheel. Please indicate!!

DELETED ACCOUNT
This junction is a "pinchpoint"on the A34, but then so is the one at Dean Row. The one which was supposed to be upgraded as part of the conditions of approving Bollin Park. The one which was supposed to happen "to ensure appropriate access to the site and to mitigate for the
impact of the development upon the local highway network having regard to
policy DC6 of the Local Plan and the National Planning Policy Framework". The access junction which, even before Bollin Park was part built, has traffic backed up on Dean Row Road at all material times.

Rick Andrews
Agree about the need to improve the junction. Disappointed that Barry yet again jumps on the indicator bandwagon - needs to consider an advanced driving course as you should never rely on what a driver is indicating - you need to see the car deliberately change direction as the driver may have signalled incorrectly.

Terry Roeves
CEC are anticipating housing on land by and opposite Royal London site.
Whilst Adlington Rd and Dean Row Rd, despite routine 0.5 mile jams, has no investment. North and East of Wilmslow is ignored.
As Wilmslow moves towards being divided into two constituencies and together with Handforth, Wilmslow East is subsumed into Greater Manchester, CEC have confirmed by their inaction that Dean Row is no longer of interest to them. They have our money.
WTC recommendations for the Local Plan were completely ignored by CEC and also the Inspector, so work it out for yourselves voters.....
However, dealing with this pinch point makes sense, but others highlighted years ago remain. One hour from the airport tunnels, on Altrincham Rd to Dean Row Rd? Three quarters of an hour from Stanley Green to Wilmslow Park? Three quarters of an hour to Poynton? Three quarters of an hour to Bramhall? Three quarters of an hour from Macclesfield? No point in going to Parrs Wood cinema in the early evening, you won't get there - go to Knutsford.

Pete Taylor
This road widening scheme is part of the planning application 16/2314M by Royal London for development on land to the East of Alderley Road. See submitted plan view: http://bit.ly/2hRXi1w

This is Green Belt land and was one of the areas where Cllr Menlove (and other local CEC Councillors) voted, more than once against public opinion and with the Tory Party whip, to remove the Green Belt protection.

The drainage issue referred to by Cllr. Menlove is not on the highway; the past instances of flooding have been caused by the land drain in the woodland on Royal London site being under-sized, backing up, lifting the chamber lid and overflowing onto the road, in extreme conditions. Should this not have been dealt with by royal London already?

Adding the extra lane would mean the felling of approximately 30 trees covered by a tree protection order.

Simon Worthington
The traffic caused by the local employer who wish to extend their site is the cause of this congestion compounded by the second unrestricted exit which allows traffic heading south to join the road when the lights restrict the flow. The through traffic from Knutsford road obviously choose to queue through the town centre to join the A34 at Atlantic Ford instead of using Alderley Road as intended by "traffic management" surveys. Hence the gridlock in the town centre every evening.
The entry to the A34 at Deanrow is a planning shambles. It was quite foreseeable that huge congestion would occur.
When the solutions are so blindingly obvious why do we even have to debate the issue?
I suggest as an exercise we ask the local primary school children to come up with a plan - it could hardly be worse than what the "experts" have put in place!

Anna van der Feltz
The problem is that at peak times it's impossible to get a break in the traffic streaming from the A34 bypass, it takes too long to get out onto the roundabout, I don't see how adding an extra lane will solve this?

Craig Wilkinson
Several years ago , I met with Doug Mackie from the Highways dept ( on site) and told him that I thought this roundabout was dangerous. I live off Fulshaw Park South and at times it is very difficult to turn right onto Alderley Road, however, when at the roundabout junction , one frequently sees cars indicating left, as if going to Wilmslow, but carrying on and going onto the A34. My wife had a bad experience last summer, when a young " gentleman", in the lane for turning left onto the bypass, tried to undertake her on the roundabout, then tailgated her into Alderley, making gestures, leading her to take evasive action, as she thought he was following her, even though she knew she had been in the right lane for carrying straight on for Alderley and he was in the wrong

Fiona Doorbar
This roundabout needs lanes widening and traffic lights on it as the constant stream of A34 thru traffic causes the problems at peak times as you simply cannot pull out. This would also calm the speed of vehicles too. Stockport added lights to the roundabout at Portwood some years ago as it had the same constant flow issues and traffic used to back up onto the M60 at high flow times. No problems there any more ...there are quick change lights in place that keeps the flow fair and even.

Roger Bagguley
An extra lane acting as a slip road on to the A34 will improve things but this is looking like a stand alone project that will result in little gain. The Local Plan calls for housing on the Royal London site to be accessed from the A34, assumedly not far from the roundabout. Access will be required to the business park and an extended Wilmslow High School will require improved access too. Access requires egress too. Is it not the case this plan to improve access from Alderley Road should be a part of a whole that adds a third lane to the A34 between the Alderley Road roundabout and the roundabout at the school? Otherwise little will be gained.

Without doubt Royal London should be involved as major financial contributors to this when the106 agreements are finalised as part of the planning process.

Kevin O'Toole
I live just off Fulshaw Park South & at certain times of the day turning left onto Alderley Road takes a while to join due to speeding drivers (turning right is a safety gamble). That A34 roundabout from Wilmslow to Alderley Edge is also very dangerous. Can't wait to see what the brainiacs come up with? Houses on the roundabout probably.

Jonathan Follows
The proposed upgrade will improve things, even if only by a little.

Craig's wife, although quite correct herself, suffered because the other driver was forced to guess which was the correct lane to use when travelling from WIlmslow to Alderley Edge. It's the right-hand lane, as she knows (and I now know), but it's completely unclear to anyone using the roundabout for the first time. And why, then, when travelling in the opposite direction (Alderley Edge to Wilmslow) is the left-hand lane the correct one to approach the roundabout in when wanting to use the second exit? Illogical and badly signed - whenever there's heavy traffic the road markings alone are inadequate and obscured. Simple solution would be a sign such as on the approach to the A523 Bosley lights, but better will be to widen to three lanes I agree. The only solution to breaking the constant traffic flow, sadly, will be traffic lights - but I expect these will be too expensive to consider anyway.

Manuel Golding
I cannot find any mention within Royal London's planning application, 16/2314M, that relates paying for the Alderley Road widening scheme, which CEC states will cost around £1.2 million.
Who is paying this sum? The company or the council tax payers?
I cannot find any mention of a Section 106 agreement.
Where is the money coming from? We need to know pronto.