Barlow's Beef: Are we heading for a toilet war? 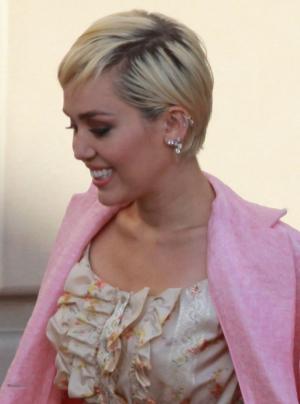 There's been a lot of odd stories in the news recently don't you think? None more so than the transgender toilet war raging across the USA which seems to be heading towards unisex toilet facilities.

Miley Cyrus, the gyrating songstress lambasted for her barely disguised depiction of an act that should not be flaunted in front of 12 year-old fans, cancelled gigs in support of the Freedom to Pee movement. Nice to see she has a conscience and isn't just chasing publicity.

Then there was Muirfield Golf Club losing its status as a premier golfing venue after members voted to refuse membership to women.

Does any organisation have the right to choose what members to accept or should it be open to all? Personally I think Muirfield's action in banning women members just furthers the belief that golf clubs are dull staid establishments catering to the needs of pompous old misogynists but, hey, it's their club.

As recently as 2012 Julie Bentley, head of the Guides organisation, said: "Since 2007, girls of all ages have been allowed to join UK Scout groups, which traditionally were only for boys. However the Guides do not allow boys in and that's the way it should be."

Clearly Muirfield does not have a monopoly on prejudice.

I'm not sure the WI would rejoice at a flood of male applicants and while the National Black Police Association flourishes any white equivalent would be seen as toxic.

While mocking Christianity (see Monty Python for details) is accepted as light-hearted fun it can mean a death warrant if directed at other religions and to be avoided at all costs.

So where is this society in which all colours, creeds, religions and sexes are treated as 'equals'? What makes it right for young girls to join a Boy Scout movement while denying the same right for boys to join Girl Guide organisations? Is that not sexism of the worst kind?

Or is that the City of London who believes greedy incompetent men make better bankers than smart female executives? I know who I'd prefer to be running my bank and it isn't the Old Boys Club.

Despite blizzards of legislation equality has proved as elusive as eternal happiness and often those gaining privilege instantly deny it to others (as any boy wishing to join the Guides will testify.)

As Miley Cyrus always says "When I look at you I see forgiveness. You love me for who I am like the stars hold the moon."

Brilliant, Miley, just brilliant. Your words should be on every toilet door.