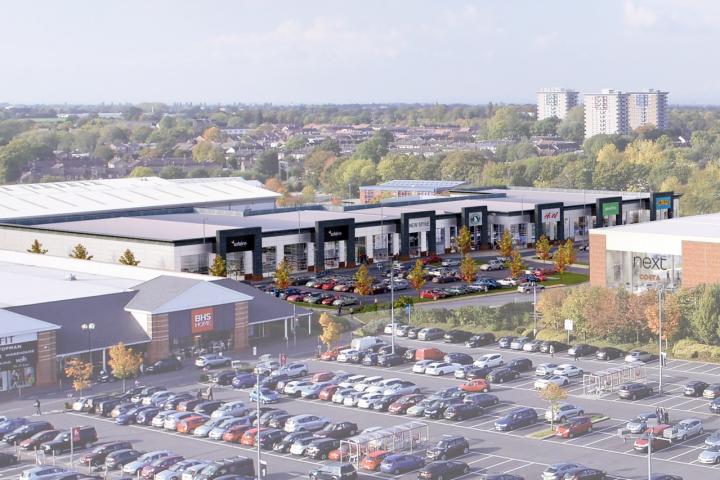 Plans submitted over a year ago for a new retail development adjacent to the existing Handforth Dean retail park, which would create up to 200 jobs, were refused by Cheshire East Council's Strategic Planning Board.

The scheme by Orbit Developments involved replacing the existing buildings with a parade of units along with a standalone drive thru unit. The proposal was for five retail units and two restaurants, cafes or takeaways along with 240 car parking spaces.

Orbit's scheme was refused at a meeting of the Strategic Planning Board on Wednesday 24th February on the grounds that the loss of employment land is considered to significantly outweigh the benefits of the proposal.

The site which lies off Earl Road and Epsom Avenue currently contains a large warehouse and smaller office building, built in the 1970s, and scrubland. It is bounded to the west by the John Lewis distribution centre and to the east is the vacant site which Consolidated Property Group have recently submitted plans for Phase Two and Three of a retail and leisure development comprising of retail units, cafes and restaurants, a gym and a hotel.

Phase One of this development is currently under construction with a Next fashion and homeware store due to open in October 2016.

A spokesman for Cheshire East Council said: "This land has never been designated for retail and therefore development of a retail site here would be contrary to the Macclesfield Borough local plan and create pressure to find alternative recognised employment sites.

"This would also impact on any existing employment uses on the site, which could be displaced, in the event of approval.

"It is important to protect recognised employment land in order to provide development opportunities for substantial commercial buildings, such as warehousing, that cannot be located in town centres or countryside locations.

"Cheshire East Council is actively seeking additional employment land as part of its emerging local plan and the Council wishes to minimise the growing pressure to release green belt land.

"As stated in the reasons for refusal, the merits of the proposal should not be judged by the numbers of jobs it creates and the loss of employment land in this case would demonstrably outweigh the benefits of the proposal."

Speaking about the decision, Mark Royle, Director of Orbit Developments, said "Cheshire East Council has refused the application solely based upon the Council Officers recommendation regarding its 'Employment land allocation' which seeks to retain the land for what might be described as more traditional uses of office, industrial, storage and warehousing. This allocation also applied to the land opposite on the site where 'Next' was approved, and is currently under construction.

"The existing old warehouse on the site already has consent granted by the Council for demolition. The premises employ 7 people and are occupied on a flexible basis anticipating redevelopment. These people could be relocated or be provided with alternative job opportunities by The Emerson Group on adjacent areas of Earl Road, thereby protecting existing employees. In addition, the refused proposed retail scheme would in itself have provided up to 200 new jobs, these being mostly local as well as construction and supply chain employment opportunities.

"Our site has been marketed for offices for in excess of 10 years, following approval for two office buildings, with little interest and no occupiers. Orbit have also speculatively invested in the construction of a new office building adjacent to the site which remains empty since construction 8 years ago. There is an unrealistic prospect that these types of future jobs would be created in buildings which would also be incompatible with the present and future retail surroundings. Policy is guidance and not mandatory, jobs are jobs and delivering real jobs the priority."

"This is a modest retail scheme with limited loss of designated 'employment land' and is located in a new retail environment. Section 106 contributions to training and investment in employment over and above those jobs created by proposed development, together with payments for local highways/footpath/lighting improvements, recreation, open green spaces and community projects in excess of £600,000 were also offered and declined."

"It seems incomprehensible that an Employment Policy designed for the economic benefit and growth in the area should restrict investment and the creation of jobs."

The planning application can be viewed on the Cheshire East Council website by searching for planning reference 15/0400M.

Planning permission has previously been granted for the demolition of the existing buildings on Earl Road and replacement with two office blocks but this did not go ahead as there has been little interest and no occupiers.

Simon Worthington
More mention of sums of cash being offered to encourage permission!!!! Whoever photoshopped the image has put the proposed "development" on top of the by-pass.
No one will take offices around there for several reasons - gridlocked traffic being one. Must be most unusual for Pete's mob to be in this position. Certainly didn't happen when the old Macc council were in charge.

Simon Atkins
So the council are happy to let developers build all over greenbelt fields and woods (re: proposed Handforth East on the A34) but won't let them build a useful shopping centre on brownfield and scrubland sites like this?! Because what we really need is more unused offices in this area...

Pete Taylor
"A spokesman for Cheshire East Council said: "This land has never been designated for retail and therefore development of a retail site here would be contrary to the Macclesfield Borough local plan........"

Since when have Cheshire East Council even remotely considered what was in the Macclesfield Borough Local Plan? Certainly not two weeks ago when they removed all the Green Belt protections which were designated in the MBC Local Plan!

Andrew Wright
So instead of an exciting new development that both creates employment and a focus for local shopping, we will leave the land to sit empty in the hope that a 'more suitable' use arises. You have to wonder whether the planning group actually represents the needs of its constituents.

Simon Worthington
MBC local plans huh. The eyesore office at 1 King's Close (planning granted as one of the last things the old Macc council shower did) was built on land designated for retail over 30 years ago. The fact that the retail development was refused planning did not affect the retail designation. In fact a very suitable residential plan (the four houses were still standing at the time) was refused a few years ago on those grounds. However, strangely, and with no one left to answer questions, planning for the office block was granted.

Mark Goldsmith
This land is not empty - I believe it currently also has offices that Pets at Home are using as additional space. If they are forced to move out of there, then they may take the opportunity to relocate everyone too. Thus losing far more and better paid jobs than this development will ever create.

Also, the 200 jobs claim is highly spurious. After the construction of the buildings, new retail outlets rarely create additional jobs. Instead they displace them from shops elsewhere.If we shop at the new development, we don't spend in Tesco's next door or shops in Wilmslow, Bramhall and even the Trafford Centre suffer, so reducing their staff numbers accordingly.

I'm not against the development, but the statement from Orbit is very dubious.

Ryan Dance
Well done to Cheshire east. Enjoy the view as you drive past. Perhaps a wild meadow would fit the bill.

Incompetent bunch of elected bureaucrats....golly aren't the green fields along a busy A road nice to stop off at and have a picnic.

Peter Davenport
What is interesting in this application, are Joness remarks, as stated next.
Our site has been marketed for offices for in excess of 10 years, following approval for two office buildings, with little interest and no occupiers. Orbit have also speculatively invested in the construction of a new office building adjacent to the site which remains empty since construction 8 years ago. There is an unrealistic prospect that these types of future jobs would be created in buildings which would also be incompatible with the present and future retail surroundings. Policy is guidance and not mandatory, jobs are jobs
With such an admission as this, surely the almost 1 million sq ft of empty offices within a 7 mile radius of Wilmslow, who needs more, as suggested for Wilmslow?

Stuart Redgard
I never though that I'd be coming to the defence of a property developer, but I have some sympathy with Mark Royle's comments and concerns. This is due to a review of the Macclesfield Borough Council Local Plan (MBCLP) .

Both the site that Orbit want to develop and the site that it's "competitors" (Alderley Edge-based retail property developer Consolidated Property Group) have permission to develop are both identified as "E3".

Why did CEC give approval to this development which is contrary to the MBCLP but refuse the a similar application by Orbit for the adjacent site?

I think Orbit have grounds to make an appeal.

Lisa Reeves
Stuart, CEC has not given approval for the Consolidated Property Group's scheme. Their planning application, reference 16/0138M, is not yet decided. A decision is expected by 18th April. http://bit.ly/1R8FN1Y

Stuart Redgard
You are correct Lisa. I have made a mistake. What I meant to say is that CEC have already approved application 12/4652M (The Next store).

All of the land immediately north of the existing Handforth Dean Retail Development (i.e. M&S, Tesco, Outfit & BHS is Classified as E3 in the MBCLP. This includes the land on which Next is being built and the land on which Orbit and he Consolidated Property Group's both want to develop into retail


What I am trying to point out is that a spokesman for Cheshire East Council said: "This land has never been designated for retail.". He is correct but neither was the land that CEC gave approval to build the next store on. So why did CEC approve an application that was clearly contrary to the MBCLP?