£1m scheme to install advisory 20mph zones near all schools 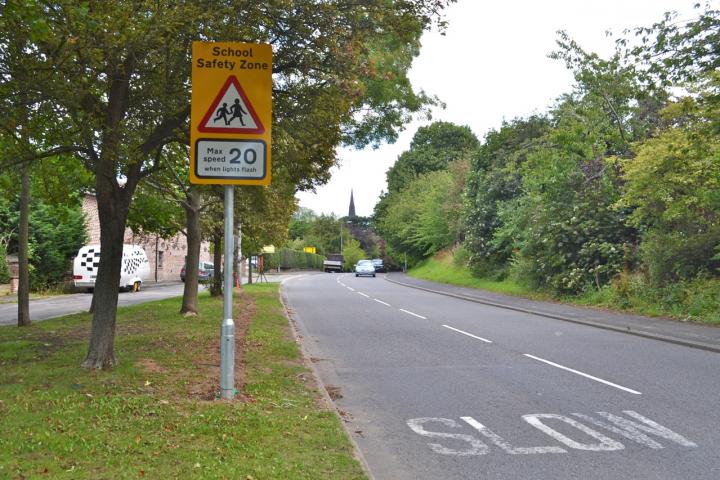 A £1m programme to install advisory 20mph zones near all schools in Cheshire East has been approved by Cheshire East Council's Cabinet.

The three-year programme will tackle more than 130 schools, which are located in areas with speed limits between 30mph and 60mph.

Year One (2015/16) of the programme includes sites which currently have a 30mph speed limit; there are existing complaints relating to vehicle speeds; the new speed limit can incorporate more than one school due to the close proximity of the individual sites and those school where flashing amber warning lights are already located on the road adjacent to the school site.

Year Two (2016/17) sites include all those where the current speed limit is 30 or 40mph and where there are no flashing amber warning lights located on the road adjacent to the school site. Local schools to be included in Year Two are Dean Oak Primary, Wilmslow High School, Lacey Green Academy and Lindow Community Primary.

Year Three (2017/8) sites include all those where the current speed limit is above 40mph and there are no flashing amber warning lights located on the road adjacent to the school site. Mottram St Andrew Primary and St Anne's Fulshaw C of E Primary are included in Year Three of the programme.

The decision follows a 2015 National Highways and Transport survey of Cheshire East residents that placed road safety as a top priority. The Council also carried out a local community safety consultation earlier this year, where a significant number of responses related to speeding outside schools.

Cheshire East currently has 160 school sites, of which 23 already benefit from either mandatory or an advisory 20mph speed limit, including those in Alderley Edge and Ashdene Primary.. The remaining 137 schools may have advisory, part-time 20mph limit signs with flashing school warning lights fitted over a three-year period.

However, advisory limits were proposed because they can be installed without formal consultation and are deliverable in the short to medium term, subject to funding. Whilst the others either have an administrative element, would require a legal process and objection period or DfT formal approval.

Councillor David Brown, Deputy Leader of Cheshire East Council with responsibility for Highways said: "Road traffic accidents are a significant cause of death or serious injury for children and young people.

"A total 60 children were killed or seriously injured on Cheshire East's roads between 2010 and 2012, and the local rate is nearly 50 per cent higher than the national average.

"We have listened to our residents concerns and are taking action to improve road safety across the Borough and – most importantly – right outside our schools."

Cllr Rachel Bailey, Cabinet member in charge of children and families, said: "As a Council we put a high priority on people's safety and especially on protecting Cheshire East's children.

"This initiative is in response to the concerns of our local residents and we would look to bring it forward in close discussion with local communities and schools.

"This is also about changing the culture and behaviour of motorists around all schools and we will look at enforcement and mandatory speed limits where appropriate and in discussion with local schools and residents."

David Scott
Not sure this will work, if drivers will not respect a 30 mph speed limit (legally enforceable ) then why should they respond to a 20mph "Advisory limit". The money would be better spent on more police officers to enforce current speed limits.

Robert Quayle
I am not convinced that such schemes add to safety. I try to drive at 20mph along Dean Row Road and Ryleys Lane when the school lights flash but this annoys following traffic to such an extent that they drive much too close and overtake me so accelerating to perhaps 40mph never mind 30.

Simon Worthington
" A total 60 children were killed or seriously injured on Cheshire East's roads between 2010 and 2012, and the local rate is nearly 50 per cent higher than the national average."
Although very concerning how many of these happened near a school at opening/closing time. A typical sound bite from the council and busybodies seeking kudos. I am not allowed to mention the councillor who so misunderstood government figures he wrote a completely inaccurate article for our now defunct local paper about "accidents" (rare, usually collisions) in the centre of Wilmslow.

Terry Roeves
In Spain, Policia Locale are always in attendance, as Township Police are in New Jersey. They care about the children in a positive manner.
You do not break the law with them watching. On the spot fines and you wouldn't want to argue with them. They know who you are and where you live.

Pippa Jones
Very good news that CEC are planning to introduce 20mph limits near schools, but children need protecting wherever they are in the community. Encouraging children (and all of us) to walk, cycle or take public transport is also very important for our health. The Royal Society of Public Health recommends a 20mph urban limit to combat the huge costs of childhood obesity: rsph.org.uk/obesity. Safer roads would help us adults too: a recent study in the Journal of Epidemiology and Public Health showed that a change to active commuting (walk, bike or public transport) for those with a commute of more than 30 minutes, there was an average reduction of 2.25 BMI units, or around 7 kg (over one stone) for the average person. Let's hope CEC take the health and wellbeing benefits of lower speed limits in urban areas into consideration.

Simon Worthington
Drive at 20mph to fight obesity!!!!! Tax the fatties out of their cars. Stats!!! also claim the slower driving eg. 20mph causes more pollution not to mention raised blood presure and lack of concentration.

Kerry Louise Burgess
Excellent news. I sincerely hope the drivers slow down when they are in force. Its ridiculous in Dean Row with how fast some of the passing cars go even when the advisory notices are on!!

Mark Goldsmith
Did you know, last year more people in the UK were killed by stairs than by motorcycles?

Or children are almost as likely to die from suicide as a road accident?

The "safety" argument though is often used to justify peoples hatred towards motor vehicles. Even though we already have the safest roads in the world, they wont be happy until all cars are banned.

How a 20mph speed will make us slimmer though is just bizarre. As 66% of child road accidents occur when kids are walking or playing, its not the best way to keep them safer either. Still, that's not the real point is it.

For the council to keep car haters happy by spending £1m on a scheme drivers can just ignore is equally as bizarre.

Kathryn Blackburn
I agree with both David Scott and Robert Quayle. More police officers please not unenforceable signage.
I like Robert have gone down Ryleys Lane endeavouring to do the 20mph at school pick up time. The speed of other motorists begets belief.

Pippa Jones
A 20 mph speed limit WILL help obesity because it will encourage children to walk or cycle to school, which will increase their activity and thus increase health and well being. Parents are not surprisingly fearful of allowing their children to walk or cycle on busy roads. There is an enormous amount of very solid scientific evidence to support 20mph limits in residential areas; this has nothing to do with "car haters". 20mph limits are supported by the Royal Society for Prevention of Accidents, and a systematic review of the evidence in 2014 showed that they are effective in reducing accidents and fatalities. 20mph limits in residential areas are not the sole answer to fatalities on the roads but they are part of the solution; the fact is that a pedestrian is eight times more likely to die when hit at 30mph than 20mph. We all need to work together to help those people who would like to walk and cycle do so safely, alongside cars and other motor vehicles. There's plenty of information available, including the 2014 Systematic Review in the Journal of Public Health, the 20s plenty website, and data from Councils that have implemented this change. So thank you CEC for starting the process, and if we really want to reduce serious accidents and increase our health, please extend the scheme further. The BRAKE charity website is a great source of information for anyone who wants more information.