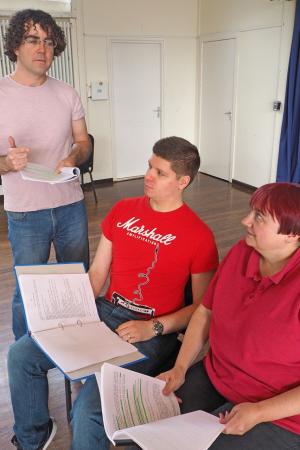 Wilmslow Guild Players' next production is the world premiere of "Double Identity", a biting thriller by Charlie Cook.

The play revolves around Charles Taylor, who calls the police to inform them that his wife has gone missing. In fact he and his lover, their maid Sarah Parker, have killed her. Or have they?... The characters are not all as they appear at the outset and it will keep audiences guessing until the last few minutes.

Double Identity was written and is being directed by Guild Players member Charlie Cook, an experienced actor, director and writer. Charlie also adapted and directed the Guild Players 2011 production of Lord Arthur Saville's Crime. "I have written several adaptions in the past, and several detective comedy one acts," said Charlie, "but I wanted to have a go at writing a full length thriller. I have always been a fan of Agatha Christie, and always watch the TV adaptions, so I decided to have a go."

He continued "I would like to tell you a bit more about the characters, but I can't really say much without giving away the plot! But it has been fun in rehearsal to watch one character in particular develop from your initial impressions, to the final denouement."

The main challenge for the Guild Players in producing this play will be building the set of a rich family home in the two days they have available to build it. As a consequence they have to leave some of the set to the imagination of the audience. "I am sure they will be up to it!" said Charlie.

The cast for the play is a mixture of regular Guild Players' members and new members. "Rehearsals have been fun," said Charlie. "As it has never been performed before, we have been rewriting some lines (intentionally!) and making a few other changes for logistical reasons. The cast have fully bought into this – often adding ideas I didn't think of, but for which I can take the credit! We have two people new to the Guild, and for one of them this is his first venture into acting since school. He is doing very well at present and I think you will see him on the Guild stage again in the very near future."

Charlie finished with a few words about writing and directing a thriller. "As with all thrillers," he explained, "the fun is trying to give a few clues so that people can say 'I got that' without giving away the final page. Hopefully, that is what the audience will get. There are several light hearted moments, a couple of shocks, and a few twists."

Double Identity runs from 28th to 31st October at Wilmslow Guild on Bourne Street. Tickets cost £7.50 and can be booked online at www.wgp.org.uk (there are no booking fees for booking online). Alternatively tickets can be booked by calling 01625 520126 or emailing tickets@wgp.org.uk.