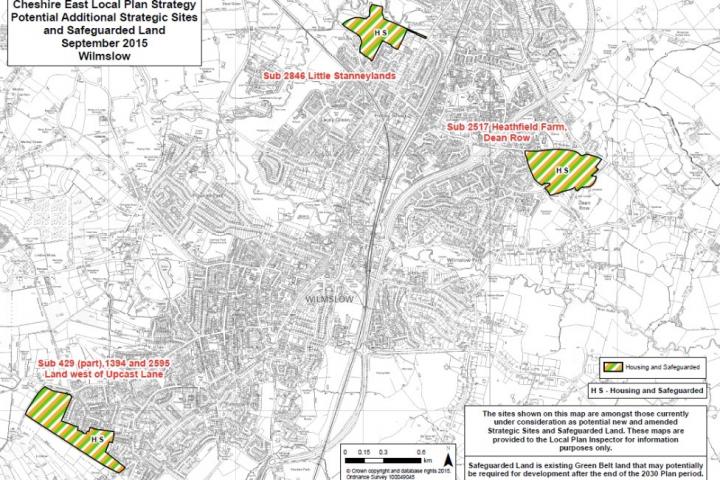 Cheshire East Council has confirmed that three additional sites in Wilmslow are currently under consideration for inclusion in the Local Plan as potential Strategic Sites for development.

A report has been approved by Cllr Rachel Bailey, Cabinet Portfolio Holder for the Local Plan, today which includes the suggested revisions, the outcome of engagement workshops and an update on the site selection.

The map for Wilmslow shows that land at Little Stanneylands, Heathfield Farm at Dean Row and land west of Upcast Lane (which is a larger parcel of land than that which was included previously) are amongst those currently under consideration as potential new and amended Strategic Sites.

It was agreed that the suggested revisions to the submitted Local Plan Strategy be submitted to the Inspector, along with the list of new or amended sites which includes two in Crewe, four in Macclesfield, one in Alsager, one in Congleton, five in Knutsford, two in Middlewich and five in Poynton.

The examination of the Cheshire East Local Plan Strategy, which was suspended in December 2014, will resume next month.

During the suspension of the examination, the Council has undertaken several work streams, including reassessing the housing need and the economic, employment and housing strategy, updating the Green Belt Assessment, reviewing the amount of Safeguarded Land and the need for a new Green Belt in the south of the borough, and amending the Spatial Distribution of Development.

In July, the Cabinet endorsed the suggested revisions to the submitted plan which include increasing the overall housing requirement figure from 27,000 to 36,000 dwellings, the economic growth rate from 0.4% to 0.7%, the number of jobs from 13,000 to 31,400, and the amount of employment land from 351 to 380ha.

Whilst in Handforth, including the North Cheshire Growth Village, the number has been revised from 2000 to 2200 dwellings with 22 rather than 10 hectares of employment land.

Alderley Park is also included in the revision, where there could be potential for 200 to 300 new homes.

In order to make further progress with the examination, the Inspector is holding a Procedural Meeting on Tuesday 6th October at Macclesfield Town Hall, commencing at 11.00am. The purpose of this meeting is to summarise the current position of the examination, outline the additional work undertaken by the Council during the suspension of the examination and explain the arrangements for resuming the hearing sessions.

The Inspector envisages resuming the hearing sessions of the examination on Wednesday 21st October at Macclesfield Town Hall, starting at 10.00am. The detailed programme for the resumed hearings will be issued later, but they are provisionally scheduled to take place between 21st and 23rd October and 27th and 29th October.

The purpose of these hearing sessions is to review the additional evidence produced by the Council during the suspension period, assess its implications for the submitted Local Plan Strategy and consider whether it fully addresses the concerns set out in the Inspector's Interim Views.

Click here to review the report prepared for today's meeting which details all the suggested revisions to the submitted Local Plan Strategy and the sites being considered by the Council as potential new or amended strategic site allocations and potential new additional Safeguarded Land.

The Council is intending to publish the revisions to the submitted Local Plan, along with new or amended strategic site allocations, for public consultation in December 2015.

Terry Roeves
Feels as if CE are making this up as they go along - year after year without delivering a Local Plan. OR they react to developer pressure, as and when they have a scheme on hand.
I must be tough for Wilmslow Town Council, trying to influence Wilmslow's future. I won't comment fully. All I would say, is that they deserve better.
Everyone agreed 3 years ago that 400 new houses was a good number for Wilmslow, including WTC, who now go along with 900, a huge increase by CEC, with no aligned economic growth forecast for us, only for the whole borough and with no realistic justification. Growth to double here?
Taking pride in the growth in rural businesses, CEC fails to pepper pot the villages adequately with new houses including affordable ones for local young families. Will success be lost? So local communities are under great stress, the pub closes, the shop closes and commuting becomes the norm from ever more expensive housing. Local families are squeezed out.
CEC can create a Rural Engine of the North, the nation's finest, IF they take this on board. Sustaining villages! Now wouldn't that be a magnificent legacy for our Cllrs? Even China are back pedalling on town and city growth. Think pollution, infrastructure and food production. Why not? If you can think it, you can do it CE!
I hope that this helps........

Manuel Golding
The three additional Wilmslow sites, all part of the Green Belt, for housing & safeguarding Cheshire East has belated added as Strategic Sites for development, illustrates just how CEC ignores the wishes of its voters. Two of these sites were voted on by the Wilmslow public as part of the Wilmslow Vision public "consultation":-.

As for the new third site, named, Little Staneylands (Staneylands Rd) has NOT featured in any public consultation.

We have seen the arrogant disregard for the public viewpoint by CEC in the dismissive way it approved development at Adlington Rd despite 84% of respondents said no to development. The council's planning board, supposedly democratic, just sailed through the public's concerns as it set its outcome on a wholly politically biased result.. And this despite the Leader's promise to a public Dean Row audience that he would ensure there will not be development there. Cllr Jones said what he said to please that particular audience, went away & disregarded their concerns as they did not meet with his council's agenda

Royal London (RL) is going to be another case of Conservative councillors ignoring their voters. The company's car parking applications to building on its Green Belt is just such an example of trampling over the localities concerns. To RL the public response was 75% against for the main campus development & 86% against development on the company owned field opposite.

So much for your concerns. Our Conservative councillors, including those representing Wilmslow, prefer to follow the party whip. However, Dean Row's voters have a champion in their newly elected Residents of Wilmslow's Cllr Toni Fox.

On the 4th August, CEC held what it called a "Technical Workshop - Spatial Distribution".A number of options were presented, 5 in fact, with rather weak back up evidence. However, the council threw in a 6th option as its "Recommended approach" for which no evidence was presented. Most of the delegates, in the main planning/development professionals clearly expressed their concerns at the 6th "Recommended" option having no rationale presented; the other 5 options had some rationale support as part of the presentation.

CEC's planners have interpreted almost nil support for 6 as being a positive yes.

If we lived in the old USSR or present day China we would have to accept that the authority knows best! Perhaps Cllr Jones will enlighten us on the ways of China's planning laws following his lyrical portrait of Chinese "can do"?

By the way, Option 6 advocates a MINIMUM of 900 new dwellings plus a further increase to a minimum of 10 hectares of commercial build, totally ignoring there are some 190,000 sq ft of empty commercial space in Wilmslow. A minimum means there may well be development way above the figures here.

Christopher Baker
According to the Daily Telegraph of 2nd Mar 2015, David Cameron is reported as stating (with regard to building houses on Green Belt land) "We’ve taken a totally different approach and protecting the Green Belt is paramount. Our priority is building on brownfield – and we’ve made it easier to do so. The aim is that by 2020, 90 per cent of suitable brownfield sites will have planning permission for housing” and "Put simply: the Green Belt is protected with us. And it is not just green belt that concerns people but green fields. I agree."

That was March, 2015. On 10th July 2015, Business secretary Sajid Javid MP told the BBC "The green belt can be rightly protected. There is plenty of land which is not green belt that we can build on and which is suitable for housing and we need to get on with it. We need to find new ways to encourage it."

If the Prime Minister were supported by local Conservative politicians, they will have satisfied themselves that there do exist sufficient brownfield sites in Wilmslow -- suitable for building houses and the supporting infrastructure -- before they proposed an increase in the number of new houses to be built in Wilmslow. I see no evidence that they satisfied themselves on this.