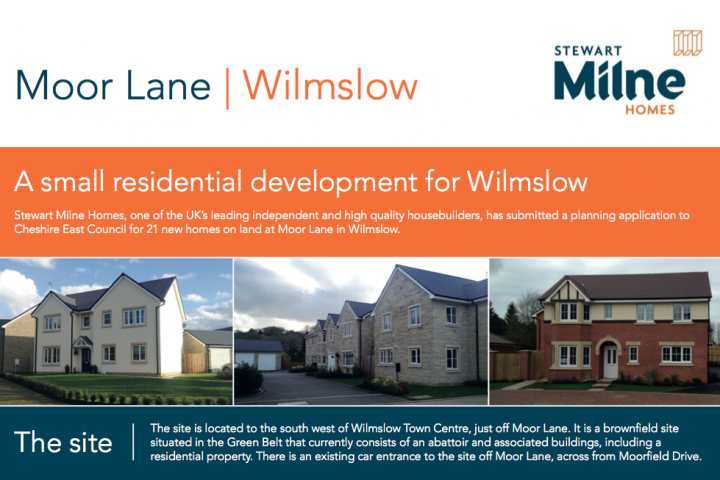 Are the developers trying to mislead the residents of Wilmslow?

Living behind Yew Tree Farm I have received a glossy leaflet which has an identity crisis. One side says it's a Brownfield site and the other side says it's yet to be decided if it's Brown or not. It is Green Belt. The LDC (Lawful Development Certificate) has yet to be formally decided but I do believe it will be formally rejected soon which is also mentioned in their own planning statement.

It states that it will keep 40% of greenspace, but doesn't mention the proposed footprint, gardens and roads is an increase of at least 121% on the current footprint of the farm buildings. It is switching the farm from mostly fields to mostly developed land.

It also says if you want to discuss plans please call them but they have given us a 0844 number which is going to put people off calling as its expensive. They also only sent this out on the 12th August when last comments were for the next day the 13th. When I called the person in charge of the plans they were on holiday and no one else is dealing with this site and no manager available due to the person dealing with it being the Director and he's not back until the 24th August!

Why send this to the residents at this point in time? It seems all very odd and I think the wording on this document needs to be investigated – it's very misleading.

The farm is Green Belt land and not Brownfield and there are no special circumstances for this application.

The submitted plans would substantially fill the plot and has an overbearing and un-neighbourly impact on neighbouring properties behind the farm.

Even if the change of use was approved the total area of the 22 houses stray off the hard stand area encroaching significantly on the green belt fields.

This represents over development of the site and will close down the openness of the countryside.

Speaking to residents I do think if the developers put in a 'reasonable' application for a few houses on the footprint surrounding the Farm House that residents wouldn't object, but this is just excessive.

It's a great part of the Wilmslow Green Belt with lots of walks just behind. The openness is truly what makes this area special and to build on it will totally change the landscape. The wildlife is in abundance in the farm fields and the surrounding areas and I hear the eerie but lovely sound of owls hooting at night and see bats dive bombing around the fields and my house most nights.

If all planners are allowed to build on the Green Belt we will end up with 'urban sprawl', and no green open spaces for future generations to enjoy. We need to protect the 'green lungs' around Wilmslow.

DELETED ACCOUNT
Amanda, the thing I have learned about developers and cheshire east is that the language they use is infinitly flexible. What you or I, and to generations of people who studied geography, call "urban sprawl" - can now be called "ribbon development" and becomes acceptable!. What you and I call the "town" and the need to regenerate the "town" by using brownfield within it, is now defined as the adminstrative boundary and this has allowed both to say that "edge of settlement" is somehow acceptable! The other one is "openness" they now draw a distinction between "openness" and "perceived openness". They just rewrite the rulebook to give themselves what they want.

Simon Worthington
To really understand this check out the Adlington Road "development". Only 200 millionaires needed for these properties which appear to start at around £800,000 a piece. Two locals have made a killing on this piece of greenbelt. The owner of the land who made a speculative purchase some years ago and sat and waited for his windfall and, of course, Pete. Same hopes for Moor Lane.
Of course no plans for infrastructure such as schools etc. from our business gurus - sorry councillors.
Perhaps the same thing will happen as has happened on Grove Avenue. The sewage system cannot cope. It was designed for a road of 20 or so houses around a 100 years ago and now has over 100 dwellings, a school and at least one office block. Lovely smell.

John Rowland
I'm just hoping Stewart Milne finish what they propose to build !!!! I go past their Hickory Grange development daily to the entrance of Whitefield Golf club where nothing has happened for over 5 years !!!! the thing is half built ... locals not happy at all and looks more like a modern take on the Parthenon !!!! This is how it looks right now:
http://bit.ly/1NaouRr