The Dogfather: The rehabilitation of Barney 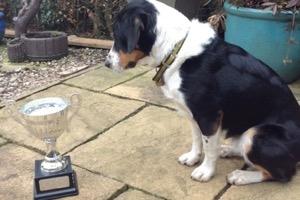 Of all the aggressive dogs I've worked with Barney was the most dangerous I'd ever encountered. Fearful, unstable and totally unpredictable Barney would attack without hesitation.

Here is Barney's story told by his now proud owners.

We got Barney from the Dog's Trust at the end of August 2014. He was described as being a little confused and scared of other dogs – this was an understatement to say the least, he wanted to attack every dog he saw regardless of size, breed or sex – he didn't discriminate.

Taking him for a walk was a nightmare as he would go mental at every dog he saw, lunging, snarling and twirling around on his lead, making it extremely difficult to control him. He had to be muzzled and wore a harness so we could contain him when a situation arose. He was a total embarrassment and we were worried he wasn't going to change.

It would have been easy just to take him back to the dogs home but we had made a commitment to him and the dogs trust, we knew he needed help, but so did we, and that's when we got in touch with Vic Barlow. He arranged a home visit to assess Barney and seeing his level of aggression he was described as an unbalanced red zone dog with fear aggression.

We joined the weekly outdoor classes at Morley Green, we knew it was going to be a challenge and needless to say on our first visit we got Barney out of the car and he went berserk. Just seeing other dogs so close was overwhelming and he had to be kept at a distance – almost in a different field!

The first few weeks were tough, both for us and Barney. Vic and his team were a great help advising on how to control him when he got aggressive and how to interact with him so his focus was on us. The rest of the group were fully supportive of our situation despite Barney kicking off every 2 minutes.

As the weeks went by we started to see a change, Barney became a little more relaxed and less stressed and we even noticed his breathing had slowed down when at rest. We had learnt how to be the leaders and be confident in our approach and there was light at the end of the tunnel.

We spent 6 months with Vic and his team and the hard work paid off, we started to enjoy the weekly classes and were able to remove both the muzzle and harness. Barney had become the well balanced dog we wanted and his obedience has improved dramatically, so much so that he won the 'Most Improved Dog' trophy – we were so proud.

Never give up on your dog.

DELETED ACCOUNT
The other good thing is that they did not take him back. They knew that Barney was now their responsibility and that they had to improve his, and their situation. Well done to all involved.

Vic Barlow
It takes commitment and effort but once dog and owner see results rehabilitation is inevitable.