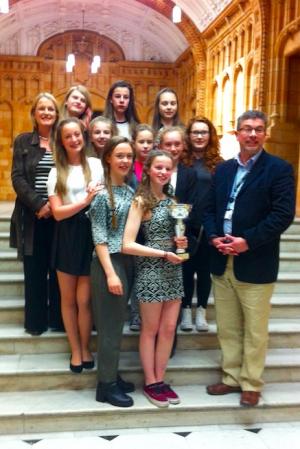 For the third year in a row, the Magistrates' Mock Trial team from Wilmslow High School competed in the National Finals.

Reaching the national final placed them in the top 16 teams in the UK, out of the 318 teams which entered the competition.

Teacher Deborah Roussak said "The standard of the Regional Finals was extremely high, and that of the National Finals was even better. We were pitched against top selective grammar schools, and we came second!"

The day was held in the Victoria Law Courts in Birmingham. The Solicitor General, Robert Buckland, gave an address, stressing the extraordinary achievement of all the teams competing and the fundamental importance of the Rule of Law. The High Sheriff of the West Midlands, Jonnie Turpie MBE, watched the performances in his fabulous regalia and sword.

Deborah Roussak added "The students worked as a real team and it showed in their performances. All the hard work and hours of rehearsals were worthwhile. We cradled our shiny cup on the train on the way home, glowing with a sense of achievement which can only be achieved by venturing far, far outside our comfort zones, and succeeding."