Lest We Forget: June 1915 Casualties on two fronts 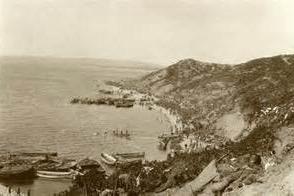 The second battle of Artois ended on 18th June, the same day that one of our young men was killed. The French had been attempting to take Vimy Ridge and the Lorette Spur, suffering over 100,000 casualties and we were continuing to offer support and diversionary attacks in Flanders and Festubert.

Our young man was Private John Thomas Blackshaw of the 1st/5th Cheshires – a battalion including men who had volunteered to get to the Front quickly. We don't know for sure but it is possible that Blackshaw was one of those who transferred in from the 1st/7th. He was killed, aged 21, in the Ypres Salient. John was the son of William and Mary Blackshaw of 5 River Street where he lived before the war with his 3 brothers and 2 sisters (2 other siblings having sadly died in infancy). He had been working as a labourer in a Calico Works and given his 4 digit service number (1800), it is likely that he was an early recruit and possibly a Territorial. His battalion sailed for France in February. He is buried at Blauenpoort Farm Cemetery 3 Km south east of Ypres along with 80,000 others and is commemorated on the civic and St Bartholomew's memorials. His younger brother, Peter, a railway lampman enlisted in late 1915 in the 14th battalion of the Cheshires, later being transferred to the Royal Engineers possibly undertaking important railway work near the front. Mercifully he survived the conflict.

Surprisingly whereas 1 in 8 British Tommies died in the war, it was more dangerous being an officer as 1 in 6 perished. Junior officers/subalterns eg Captains or Lieutenants,were especially vulnerable. (Assisted by a Sergeant they usually led a platoon of 4 sections, each of 12 men under an NCO – Corporal or Lance Corporal.) Two of our local junior officers were to die on the same day (4th June) in the killing fields of the Gallipoli peninsular – both being remembered on the Helles Memorial.

Captain John Hamer Clegg of the 10th Manchesters was the son of Mary and Charles of "Oakleigh", Wilmslow. Born in Oldham in 1887 he was at boarding school in Llandudno in 1901, but by 1911 had come home and was residing with his parents, 2 sisters and 4 servants (a cook, 2 maids and a nurse). Hi father was of "private means", but John worked in a cotton spinning works. He is commemorated in St Bartholomew's, on the town memorial and on the family grave in Wilmslow cemetery.

Another member of an affluent family to die tragically on the same day in the Dardanelles was Second Lieutenant Frank Helm, aged 34 serving with the 8th battalion of the Manchesters. He is commemorated on the civic memorial and in the churches of St John's and St Chad's. Moving from Heaton Norris via Styal ("Holmlands", Wood end) to "Lindfield", Wilmslow he lived with his father, John (owner/manager of a calico printworks), his mother Mary, 4 sisters and 4 servants (this time a cook, a maid, a parlour maid and a kitchen maid). He and his brother worked as salesmen for their father. By the way, "Lindfield" was where we now have Fulshaw Park roughly where Westminster Drive is today.

Frank's commanding officer was Brigadier General Noel Lee who was in command of the 5th, 6th, 7th and 8th Manchesters - around 3,600 men. Lee was promoted uniquely for a Territorial to this rank in 1911. He famously led his 127th brigade in the assault on W and V beaches at Cape Helles on 6th May. There shrapnel, artillery, merciless machine gun fire, heat, disease and shortages took their toll on everyone. On the 4th June at the 3rd attempt to take Krithia and the heights of Achi Baba, Lee himself was wounded badly in the throat and jaw. He took himself to the Casualty Clearing Station and had to be persuaded to use a stretcher. Indeed the 8th finished this bleak day without a single officer still standing. Operated on and then shipped to Malta on 6th June, his condition deteriorated and he died on the morning of 21st June in the Blue Sisters Hospital. After an impressive funeral he was interred at Pieta Cemetery on the island. His brigade remained at the front for 8 more months during which time 8,547 men were killed, wounded or missing.

Noel Lee was born in 1868 in Bowden, the 3rd son of Sir John Cocksey Lee (knighted for his work in establishing the Manchester Ship Canal). In civilian life Noel Lee was director of his family firm – a Manchester textile company Tootal Broadhurst and Lee– and although an old Etonian, was made to start his career as a mill hand. He married Lilian of Tilford, Surrey in 1896 and they lived at Heawood Hall, Chelford, Nether Alderley with their 3 children and 4 servants. They worshipped at St Mary's where he is commemorated. This extraordinary man seemed to be respected by all and his name can also be found on Styal memorial (he moved to Quarry Bank House in 1911) and in St Bartholomew's. Lee was posthumously mentioned in dispatches.

It was clearly dangerous being an officer and leading from the front in the Great War. These 3 brave men – Clegg, Helm and Lee – were just some of the 42 officers in total the community would lose in the conflict.

with a contribution from Michael Scaife