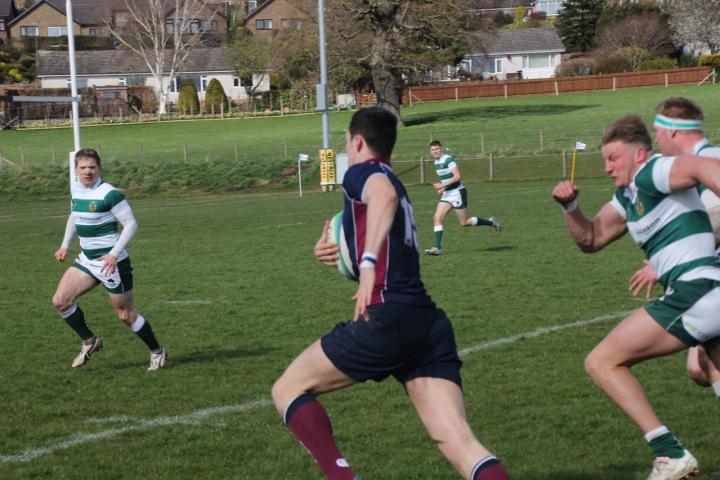 Four times this season, Wilmslow had taken the high road to Cumbria and three times they had returned on the low road with a heavy beating to remember for their trouble. Hopes were high that they could do better at Penrith but in the end, it was the same old lament they had to sing.

For around sixty minutes, this was a decent contest between the two sides lying fourth and fifth in the league. During this period both sides had scored three tries and with Penrith just three points ahead at 20-17, it was still either side's game. The turning point came when Adam Taher got a Yellow Card and for the second time in the afternoon, Penrith made their numerical superiority count with a fourth try to take them ten points clear. The wheels now started to fall off the Wilmslow chariot as the home side seized control to run in three more tries in the last quarter of an hour to thoroughly avenge their January defeat at The Memorial Ground.

On this showing Penrith are clearly going to be a top of the table force next season and along with Kirkby Lonsdale probably ranked in the first two Cumbrian club sides. They possess a young well coached side with plenty of skills and pace. They showed that when in possession many of their players had the strength and ability to cross the gain line. They had to be firmly tackled because otherwise they would just stay on their feet until forced to go to ground. Add to this their excellent support play or running off the ball, call it what you will, and they frequently created options and space for themselves, even though they were guilty at times of unforced handling errors. Only in the set piece scrum, did they appear to be under some pressure but not so much that they weren't able to quickly clear the ball in usable fashion and even here they managed one clean strike against the head.

For the Wolves, it eventually became a bridge too far. Disrupted by injuries and Yellow Cards, there was a constant change of personnel in the last half hour as the management tried to effectively manage its diminishing resources. Alex Taylor had to retire with a reoccurrence of his back problem, his brother had to have his wrist strapped and others just started to look jaded in the face of a constant barrage of Penrith runners. On the counter, they still threatened, Ed Stobart going close more than once, but as the game slipped away from them so their handling became unreliable and their attacks increasingly sparse and desperate. They could neither retain sufficient possession to be in any sort of control nor keep their occasional break outs alive because simply there was insufficient support and they don't have the genes tochange their pace when necessary to allow the support to get to them. Time and again the ball went loose and Penrith capitalised with some incisive breaks. In fact, Wilmslow players so often lost hold of the ball that one wondered whether the Penrith players had been coached in the art of how to dislodge it from the carrier.

The Wolves had got off to a good start, scoring within three minutes from a scrum on their own twenty two. A couple of drives from the base of the scrum produced quick ball, a miss move and Lawrence James intruding to take the pass for an eighty yard run to the line. Unfortunately, the Wolves carelessly got turned over at the restart, were caught offside and Penrith took the three points on offer. This was followed by the Wolves best sustained period of the game, which led to space once again being created on their left, this time allowing Sam Cutts to make the line. Once again though, the Wolves were caught offside at the restart and only survived a Penrith catch and drive by their finger nails. They looked to have cleared their lines when a kick was fielded by the Penrith full back Steven Cherry back on half way. With a bit of space it was like meat and drink for him as he surged up the middle of the field and set up a second phase which led to an easy score for the substitute James Spencer in the corner.

The next twenty five minutes produced scrappy play full of good intent from both sides. Matt Shufflebottom got a Yellow Card and whilst he was off the field, the home side, Pale Tuilagi, broke through some indecisive tackling to score their second try on the half hour. Before half time though, both Harry Patch and Stobart had dangerous looking runs. Penrith got the ball back and kicked out of defence. As it bobbled about it looked as though James had knocked on but the referee didn't see it that way and James's kick to the Penrith corner was allowed to stand. It was taken by Lee but he was caught decisively deep in his own half and as the ball went loose, it went to Taher, who restored the Wolves advantage with try number three.

The Wolves started the second period brightly enough, they had a strong wind in their favour and it was thought that judiciously used it would help to keep Penrith penned back. To use it though, you had to first of all get possession of the ball and this dried up, mainly because Penrith were masters of retaining it. Their fourth try soon followed as they used their one man advantage for centre Jamie McNaughton to score but it was not for another fifteen minutes, during which the Wolves had their chances, that they got their fourth from their lock J J Key.

That was it, game set and match to Penrith. Wilmslow though still had their chances but twice they lost lineouts in good attacking positions on their own throw and twice Penrith snaffled the ball to run away for their fifth and seventh tries. Their sixth try also had its origins in another Wilmslow attack which broke down because of a lack of support. There was now a distinct weariness in Wilmslow's play as the game rapidly turned into a procession and no doubt relief all round when it was finally brought to an end after Penrith's final score.

Photo: Lawrence James on the attack at Penrith.