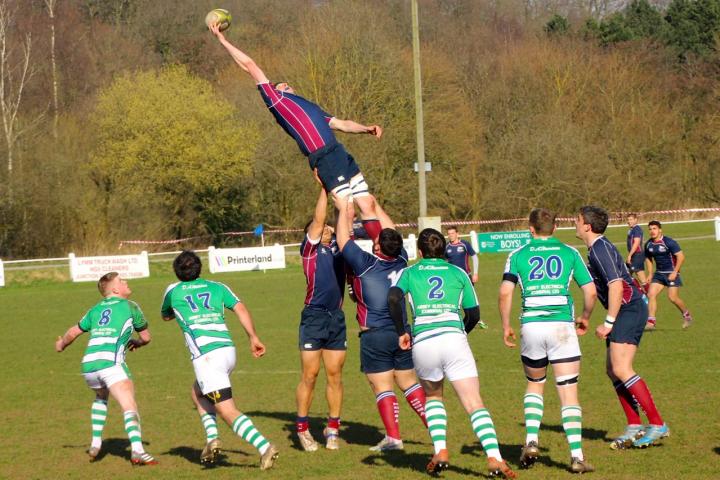 Wilmslow had always been expected to win this one against a Wigton team marooned at the foot of the league and staring relegation in the face. Yet despite scoring nine tries, only one of which was converted, it won't be remembered as the most glorious or satisfying of wins. There was just a lack of bite in the Wolves defensive work and too many of the front five wanted to play in the backs and not to put in sufficient hard graft in the tight phases. After scoring six tries in the first half hour, the Wolves play over the next fifty minutes was disappointing. Indeed the visitors enjoyed an equal share of possession and territory to actually win the period by 19-17.

Wolves coach Rick Jones succinctly summed it up afterwards. "We can't expect to win if we play like that again", he said.

Even in the best of times, long trips away from home have always been a problem for a rural club like Wigton. Many of their players have to work on a Saturday morning, most likely attending to livestock which can't be left to their own devices and, no doubt, when you're in a hopeless league position, the motivation to get up in the middle of the night to get your work done and be ready for a 10.00am departure may not be quite there. Seven of the team that the previous Saturday had earned a reprieve by beating Vale of Lune was absent so all credit then to the youngsters, many of them still colts, drafted in to represent their club in its hour of need.

They would have known that they were going to have a difficult time but after a disastrous first half hour, they buckled down to the task ahead of making life as awkward as possible for the Wolves. From being shoved around in the early set pieces, they managed to achieve parity by the end. In the lineout, they found a way of nullifying Ms. Clifford and Hewitt, although whether their tactic of delaying the throw should have been permitted by referee Nock is debateable.

With a fair share of usable possession, they wisely kept most of it in the hand and helped by an excessive penalty count in their favour, their experienced half back pairing, Fergus Ledingham and David Hanabury, gradually worked them into the game. Their tactics had the effect of 'bottling up' the free flowing Wolves backs, whose subsequent efforts all had their origins in hard earned possession, won in their own half of the field. Wigton may have been down - going down - but they were most certainly not out in a spirited display.

The Wolves had their first try on the board within a minute when wide passing first to the left from the kick off and then back right again stretched the defence sufficiently for a typical Ed Stobart score. From the restart, the Wolves were on the attack again with Clifford, Day, Cutts and Stobart all handling, Clifford twice, before Stobart crossed again. The third try had a touch of fortune about it as the Wolves turned over Wigton possession in their own twenty two and put in a long clearance which sat up nicely for the pursuing Mike Black to put James away on about halfway.

Try number four followed from a strike against the head, which culminated in a forward drive and score for hooker Tommy Wilkinson. At this stage the Wolves front row of Adam Taher, Wilkinson and late call up James Venables were in complete charge. Venables was named by coach Rick Jones as Wilmslow's man of the match for his display. James's second try had its origins in a catch and drive from five metres and Stobart's third came from another disrupted Wigton scrum. The loose ball was seized by scrum half Barker and quick handling created a simple run in. James was having a decidedly off day with his goal kicking so he relinquished kicking duties to Barker, who wasn't any better. On another day 30-0 could easily have been 42-0.

The visitors now hit back and in quick succession, aided by an ever growing penalty count in their favour, scored twice. Fly half Hanabury nipped over in the corner, converted by Ryan Clarke and then winger Steven Harris was on hand to finish off a break initiated by scrum half Ledingham.

It took a long kick out of defence by James to get the Wolves back on the attack in the second half. From the lineout, they drove and then recycled going left, second row Clifford getting across as he so often does for the touch down. Substitute winger Ian Culligan was next on the score sheet from a lengthy run down the right. Wigton centre Richard Moffatt then found a big gap unguarded in midfield for him to exploit for Wigton's third try and then as they came again in the last moments, they lost the ball which found its way to an unmarked Sam Cutts on his own line.

Cutts made hard work of it but after being forced to kick from halfway, he followed up for a bit more of the round ball stuff before finding himself with time to collect the ball and flop over the line for the final score. It wasn't a thing of great beauty but that just seemed to sum up Wilmslow's performance on the day.

The five league points consolidated Wilmslow's position in fifth place but they'll have to put in some hard work next week when Bolton are the visitors. We know they have a boisterous pack which is capable of causing problems and still being involved in the relegation scrap at the foot of the table, they have everything to play for.