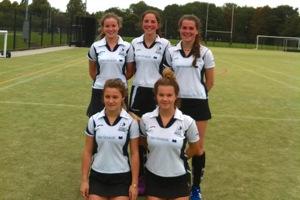 The hockey season is well underway for the boys and girls at Wilmslow High School. Following an extremely strong season last year, the boys U13 team continued where they left off with a comprehensive 5 – 0 win away at Manchester Grammar School. It was a tougher test for the U12 team however, who lost their opening fixture to the same opposition. The U12 girls team have also played their first fixture of the season, and despite narrowly losing 2 – 1 against Arnold, they showed great potential for the rest of the year.

Wilmslow's Senior Girls team have already played 4 fixtures, winning against Arnold and Kings Macclesfield and drawing with King's School Chester before losing to a strong Kirkham Grammar School last weekend. The girls will be hoping to put things right in their opening fixture in the U18 National Competition this week.

Five members of the Senior Girls squad, Saskia Swatkand, Anna Perry, Issy Reynolds Duffy, Ava Johnston and Emilie Kelman have been involved with the Junior Regional Performance Centre this year. All five girls have progressed via assessment from the Junior Academy Centre and receive high level coaching from JRPC coaches who are supported by England Hockey's centrally contracted coaches. Having reached this level, those girls will now be hoping that they are invited to the U15 or U17 high performance assessment camps (HiPACs)or to the England Hockey Futures Cup at U16 and U18 level. We wish them every success.